Supervisors mull bridges and IT system 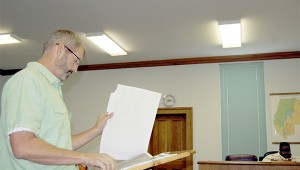 Photo by Cassandra Favre
At the Pearl River County Supervisor’s meeting, county Engineer Les Dungan reviewed a list of 50 timber-made bridges that need to replaced within the county.

The Pearl River County Board of Supervisors met this week and received reports from county engineer Les Dungan about the current condition of county bridges and from Pileum Corporation CEO Sandy Turnage about his company’s assessment of the county’s information technology system.

According to the Dungan, there are 160 bridges in Pearl River County and approximately 50 of them are still comprised of timber components.

“We haven’t used timber in bridges for at least 20 to 25 years,” Dungan said. “Bridge components that old are fast approaching critical condition.”

Bridge inspections are conducted every two years, Dungan said, and the bridges are rated based on deterioration.

“My recommendation is based on traffic count, the physical condition of the bridge, property acquisition and environmental conditions,” Dungan said. “A temporary bridge would be required during the construction phase because of the high traffic volume on that road.”

Dungan said that this particular bridge has timber pilings and as a result, the weight restriction of 10,000 pounds is posted.

The board approved a motion to seek federal funds to replace the bridge.

Dungan said it will take about a year to complete the design, determine right of ways, evaluate environmental costs and perform land acquisition.

The new bridge will be composed of concrete and withstand almost 80,000 pounds, Dungan said.

“The alarming thing about it, is that all the county bridges are pretty much in the same condition,” Dungan said.

The board reviewed a report from the IT consulting firm Pileum Corporation regarding the county’s system.

Turnage said there was a good quality system in place, but there is a need for improvements.

The CEO said his consultants found inconsistencies with the system’s backup and lack of written disaster recovery plan.

“There is also a lack of network documentation,” Turnage said. “If the county’s IT staff is absent, then there needs to be instructions in place should someone take over the network.”

Turnage also recommended that the fiber optic cables be run underground in an attempt to prevent weather-related damage.

The county’s phone system is antiquated and there are email server issues, Turnage said.

“County personnel told us that their IT staff does a great job, but it takes some time before they get there,” Turnage said.

District I Supervisor Anthony Hales told Turnage that he is aware the IT department is short-handed and county offices are spread thin.

District IV Supervisor J. Patrick Lee asked Turnage to return to the board with a priority checklist that included rough improvement costs estimates.

“These evaluations are usually a positive thing for the IT department,” Turnage said. “The county can make the right changes where they need to be made.”