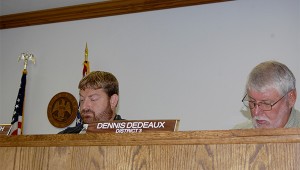 Photo by Cassandra Favre
District IV Supervisor Sandy Smith (left) and District III Supervisor Dennis Dedeaux (right) were against the recommended general fund budget. Dedeaux voted against, however Smith was unable to vote due to a family emergency. Both supervisors said they wish to see extra funds allocated to a rainy-day fund.

The Pearl River County Board of Supervisors voted two to one on Monday to adopt the county’s 2014-2015 budget with no increase in taxes.

According to state law, municipalities must adopt their fiscal year budgets by September 15.

District II Supervisor Michele Carr was not in attendance and District IV Supervisor Sandy Kane Smith left the budget hearing before the vote due to a family emergency.

Smith and Dedeaux both said they were against this budget because they want to utilize any extra money to establish a rainy day fund.

According to Dedeaux, there was about $400,000 extra in the budget this year.

“I voted no because I wanted to save the money to put towards the ADA compliance repairs at the courthouse and other maintenance,” Dedeaux said. “I’ve got nothing against the department heads, but we need to plan ahead for maintenance and infrastructure on buildings.

Dedeaux said his suggestion was to split the $400,000 using half for ADA repairs and the other half for maintenance.

Smith said he didn’t see the point in spending the extra money just because “we had it.”

“This is the first time the county has had a little extra money and I would like to see some go towards the courthouse repairs,” Smith said. “The roof on the county jail is going to need to be repaired soon.”

Smith said the roof has been patched with Kool Seal on numerous occasions.

Smith said he believes the department heads manage their money very well and stayed within budget.

“Just because the county has the money, doesn’t mean it all has to be spent,” Smith said. “The department heads are going to spend every bit of that money. The county doesn’t have a rainy day fund and one never knows what lies ahead. We need to keep about $300,000 on hand to fix buildings and accomplish the tasks that need to be done around the county.”

Smith said he would have voted against the budget had he been able to stay the duration, which would have resulted in a tie vote.

The total budget for the general fund is $15.9 million.

The next supervisors meeting will be held on Wednesday, Sept. 17 at 9 a.m.