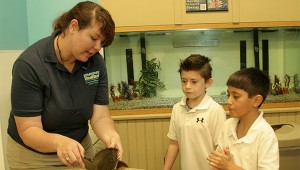 Nicole Liles is a zoology and psychology major at Mississippi Gulf Coast Community College. She has worked at the Institute for Marine and Mammal Studies for the past three years. During the PRC Upper Elementary tour, Liles educated students about horseshoe crabs.
Photo by Cassandra Favre

More than 100 fourth and fifth grade students from Pearl River Central Upper Elementary were treated to a wet and wild experience at the Institute for Marine Mammal Studies in Gulfport.

Last year, Sweigart said the school sponsored a field trip to the Hattiesburg Zoo for the top-scoring students.

“This is our way of letting the students know they will be rewarded for outstanding performances,” Sweigart said. “I feel like this is a great way to motivate and encourage our children to do their best and to inspire the ones that didn’t score advanced to go that extra mile next year. We have great students and want to reward them for that.”

The students began their tour with a greeting from IMMS President Dr. Moby Solangi.

Solangi has a PhD in marine biology from the University of Southern Mississippi and is the former owner and operator of Gulfport’s now defunct Marine Life Oceanarium.

The current IMMS facility was built in 2008, Solangi said, and its purpose is public education, conversation and research on animals in the wild and under human care.

The students dug for fossils in the museum room and learned about the facility’s dolphin and turtle rescue programs.

The facility houses a surgical suite, marine veterinarian office, turtle hospital and a quarantine area, Solangi said. In the turtle hospital, hooks are removed from the turtles and they are treated for other ailments and rehabilitated before they are released back into their natural habitat. There is a Kemps Ridley sea turtle on site, which is the world’s most endangered sea turtle, Solangi said.

In the discovery room, students got up close and personal with a variety of local marine species.

“Guests can touch stingrays, sharks and horseshoes and blue crabs,” IMMS Vice-President Samia Ahmad said. “This area is home to species from many different habitats including, swamps, marshes, freshwater and saltwater. These tours give community members a view of things that they may not see in the Gulf.”

Ten-year-old Brianna Alexander said it was her first time to pet a stingray and she said they are very slimy.

Ahmad said that these up close and personal experiences help guests understand the animals and their environments.

The students also participated in an informational session about sea life and also got to see a live reptile, a young alligator.

Trace was among the first group of students to participate in the dolphin rescue relay game, an interactive activity designed to show the students how a dolphin is rescued.

“It’s truly amazing that the staff here gets to fix up the animals,” Waguespack said. “I’m really excited that my principal arranged this trip for us.”

Kara Byrd, 9, said this was her first trip to a marine mammal institute and she was excited to touch the animals.

“I want to be a veterinarian when I grow up and that’s what they are doing here, saving animals,” Byrd said.

To conclude their tour, the students were treated to a dolphin and sea lion show.

Ahmad said that all the dolphins were rescued and rehabilitated, but due to health reasons, were unable to be released back into the wild.

“This is a great opportunity to reward the students with,” Solangi said. “Some of the students have never seen this kind of environment and hopefully it will stimulate people to study marine sciences.”

The IMMS is a non-profit so all proceeds go toward research and rescue efforts, Ahmad said.

According to Solangi and Ahmad, there are about 45 trained biologists and psychologists at the institute. The IMMS also offers an internship for students at local higher education facilities.

Ahmad said the institute offers a fun, family-oriented learning experience for guests of all ages.

Visit the institute’s website at www.IMMS.org to learn more about other programs and research and rescue efforts.