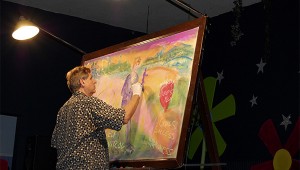 The students at Pearl River Central Upper Elementary received a powerful message about art and choices on Monday during a presentation by Jacksonville, Fla. artist Cliff Beaman.

Beaman is a professional artist, cartoonist and educator and has shared his presentation in more than 4,800 schools during the past 25 years, the artist said.

According to the artist’s website, these themes include, God and Country, America the Beautiful, Sharing Brotherhood, Choices-Drug Education, Excellence, The Earth, You and Me, Be Ye Thankful and Exploring America thru Art and Music.

The children at the upper elementary learned about the dangers of drugs, alcohol and tobacco use during Beaman’s Choices-Drug Education program.

“I want to share art and a positive message with the students,” Beaman said. “Adding music means more than just reading in a textbook.”

Beaman said he wants students to make good and wise health choices and avoid involvement with drugs, alcohol and tobacco.

The mural depicts substance users on the left, in the middle are the words “self-control” and a young man under a rainbow walking towards the words, “somebody loves you,” “success,” “goals” and “happiness.” Once the mural is complete, Beaman utilizes special lighting effects to emphasize the words “Just say No.”

“People have to put a positive spin on the direction they are heading,” Beaman told the students. “If people have goals, then they will be successful. People have got to make a conscience decision that drugs, alcohol and tobacco are not going to be a part of their lives.”

“His drawing was really good,” Sticker said. “I learned that almost any kind of drug that you can buy can hurt you really bad.”

Fifth-grade student Gavin Brown said that it was cool to learn about what tobacco does to smokers.

“I learned that tobacco isn’t good for you,” Brown said. “It can cause cancer and it’s best to just say no.”

Ten-year-old Tessa Bullock said that some kids her age don’t really think about how all drugs can damage a person’s body.

“I learned that if you do these things one time, it can lead to another and another time,” Bullock said.

Tyler Diebold, 10, said it was fun to watch Beaman draw and learn what not to do at the same time.

“I learned that if people become addicted to drugs, it can be bad and lead to a miserable life,” Diebold said.

PRC Upper Elementary social worker Paula Russell said this assembly was a great way to kick off the school year. This is a fun way for students to learn about making good choices and educating them about the dangers of drugs, alcohol and tobacco.

Learn more about Beaman and his presentations at www.americanartassemblies.com and through YouTube.