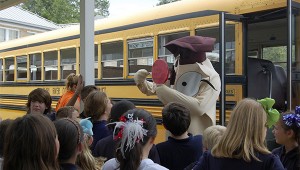 Photo by Cassandra Favre
Pearl River Central Upper Elementary Assistant Principal Val White donned the Hooty the Owl costume for Wednesday’s SOAR program. The owl is the mascot of the bus safety program. Elementary students learned how to be safe on and around a school bus.

Fourth-grade students at Pearl River Central Upper Elementary learned about school bus safety on Wednesday during a presentation of the district’s SOAR program.

Beech said she learned about the SOAR program at a transportation conference. The program is modeled after a similar program in Forsythe County, Ga.

“This is the second year our transportation department is hosting SOAR,” Beech said. “We had a great response from students and parents last year. The number of disciplinary infractions also decreased.”

The program is separated into three parts or buses, Beech said.

On the first bus, the students learned about loading and unloading safety procedures, Beech said.

Mendy Wood is a district bus driver and taught the students about the danger zone and driver’s hand signals.

Wood also demonstrated driver hand signals, which indicate to children when it’s safe to cross in front of the bus and when to board the bus.

Jami Smith, another district bus driver, manned the second bus and taught the children emergency and weather evacuation drills and about stranger danger.

“Stranger danger occurs when an unauthorized individual attempts to board the bus,” Beech said. “We teach the students to hide all the way down in their seats so that the person doesn’t know how many children are aboard the bus.”

On the third bus, the children are given a review of all the safety procedures learned, Beech said.

No SOAR program would be complete without a mascot. Pearl River County’s is Hooty the Owl, Beech said.

“I like this program because it gives the children the opportunity to proactively learn the district’s expectations with regards to safety,” White said.

Jennifer Adams has been a bus driver for the past 10 years and said that last year she bussed children that had trouble crossing in front of the bus.

“After they went through last year’s program, they started catching on,” Adams said. “This hands-on approach is a better way to teach the students.”

Warren Woessner has driven a bus for the past 50 years in Louisiana and Mississippi and said he has tried for years to get administrators to implement a bus safety program.

Woessner said there are children that don’t ride the bus everyday; however, the students will ride the bus on the occasional field trip and need to know the rules of the school bus.

Ten-year-old Briana Wilbanks said she doesn’t ride the bus to and from school but she does ride the bus on field trips.

“I learned how to sit down and listen to the bus driver,” Wilbanks said. “I’m going to make sure I remember all these rules.”

Trenton Holcomb is 9-years-old and rides the bus to school everyday; however, he said he is new to the district and this was his first time participating in SOAR.

“I know the bus rules pretty well,” Holcomb said. “But I did learn that you have to be 10 feet away from the bus, keep the aisles clear and how to read the driver’s hand signals.

Ten-year-old Jonathan Thompson said he rides in a car to school, but two-years-ago he learned emergency rules when he participated in a fire evacuation drill.

“If a bus is on fire,” Thompson said, “then you have to take 50 large steps away from the bus and always watch the bus driver.”

Beech said the main lesson for the students to learn is how to be safe in and around the buses.

SOAR programs will continue throughout the end of this week at the upper elementary, Beech said. Next week, the bus drivers will bring SOAR to the lower elementary.

Supervisors mull bridges and IT system