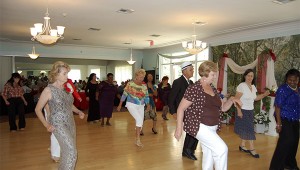 It’s the dance that most high school juniors and seniors dream about their entire high school career.

The girls hunt for that perfect satiny gown and boys will choose the most dapper looking tux to complement their date’s attire.

This special dance is of course the prom and this week about 120 senior citizens from Pearl River County arrived in their finest eveningwear to shimmy and two-step at the Senior Center of South Pearl River County’s fourth annual senior prom.

The dance was sponsored by Beacon Behavioral Health and patient care representative Melissa Brignac said that this event is near and dear to her heart.

Brignac said Jackie Kellar of Grace Health Care sponsored the prom in previous years, but recently passed away so Brignac was asked to coordinate the prom.

“I feel like the senior citizens are a vital part of our community,” Brignac said. “It is an honor to host an event that they can all enjoy.”

The contributions from local vendors and businesses helped make the prom successful, Brignac said. Community industries donated food, volunteers and prizes that were raffled off during the event.

For some seniors, this was their first prom experience.

Hilda Owen said that when she was in school there was no prom.

“Most of our parents didn’t believe in dancing,” Owen said. “I’m having a very interesting time here today and am surprised that I know so many people here.”

In a Time magazine article, the author stated that the prom can be traced back to the co-ed banquets that 19th century American universities held for each year’s graduating class.

By the 1940s a growing teenage culture brought proms to a younger and younger crowd, creating the event known today, the article stated. In the postwar economy of the 1950s, high schools began holding proms in the gymnasium.

Ruby and Jerry Hart have been married for 11 years and also said that this was their first time attending a dance together.

“The first time I went to my prom, it didn’t count because I didn’t have a date,” Ruby said. “Now I have a date. It’s been a good experience. The senior center here is great because I’ve been getting together with people on a daily basis and it has helped me emerge from my shell.”

Joan Newberger has lived in Pearl River County for the past three years and said she didn’t go to a prom because she attended an all girls high school.

“I’m having so much fun and I just love dancing,” Newberger said. “My biggest dream in life was growing old and going to an old-age home and driving the men crazy.”

No prom would be complete without a king and queen.

The oldest man and woman were crowned and sceptered by Pearl River County Sheriff David Allison.

The queen was 92-year-old Catherine Baker and her king was 88-year-old Ralph Rowell.

Baker said she attended last year’s prom and enjoys coming to the senior center every day.

“This is our fourth prom now,” Senior Center of South Pearl River County Executive Director Darlene Adams said. “Every year it gets bigger and bigger because of the outpouring of support from our community.”