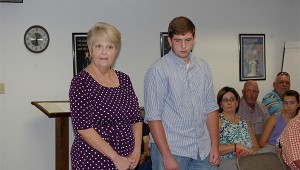 Photo by Cassandra Favre
Seventeen-year old Hunter Spiers was recognized at the Picayune School District school board meeting for his achievement on the NCCT Academic Carpentry Level I assessment test. Spiers was one of two to score a 91 overall and is now a nationally certified carpenter. Spiers is pictured with career technology director Joaun Lee.

The Picayune Municipal Separate School District Board recognized the achievements of a Picayune Memorial High School senior at Tuesday’s meeting.

Career Technology Director Joaun Lee told the board that based on 17-year-old Hunter Spiers’ 2014 career planning and assessment score in the construction year two program, Spiers was invited to take the National Construction Career Academic Carpentry Level I assessment at Mississippi State University this past June.

Lee said Spiers scored an overall 91, which included making 100’s in seven out of 14 categories.

“He is one of two students in the state to score this well and the first student in our career program,” Lee said. “He will be recognized in the State Vocational E Magazine in November.”

Lee said that Spiers has always been a dedicated student and has shown what hard work can accomplish. His father is in the construction business so Spiers has a wonderful background.

Spiers said he is now a nationally certified carpenter and plans to pursue a career in general construction. This was Spiers first time taking the assessment test.

He plans to attend Pearl River Community College after graduation and then complete his education at a four-year university.

“I am very proud of him,” Spiers’ mother Audrey said. “He took the test in half the time allotted and scored 100 percent in more than half the categories.”

Board members received a report from the director of Early Head Start Pam Thomas regarding the status of the early education program.

Thomas said there are currently about 150 children enrolled in the program. There are about 60 children on the waiting list.

Children are selected for the program based on their parents’ income and whether or not they are working or attending school, Thomas said. The parent’s status is monitored throughout the year to ensure they are following the guidelines.

Thomas said they are currently in a partnership with Child Care Partners, which is a new initiative from the Office of Head Start. The office is trying to align all childcare, daycares and licensure providers in communities under one umbrella.

“That’s a big thing for head start,” Thomas said. “It will allow children entering school to be on the same playing field.”

Thomas said they are working closely with community health providers to ensure the children are up-to-date on their health screenings.

The state is also working on a four-year-old grant that would allow the Pre-K four-year-old programs to become a part of the school districts, Thomas said.

“When leaders are determining how big a prison should be and how many prisons to build,” Thomas said, “they base it on third-grade testing scores. One of the things the state is looking at is investing in our students on the front end. For every dollar invested now, saves seven dollars.”