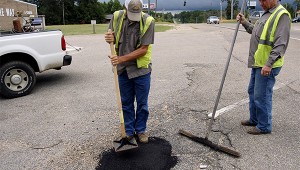 Photo by Cassandra Favre
Herman Boutwell and Greg Malley used permapatch to repair a pothole on Highway 11 North on Tuesday. Patching potholes is one of the many jobs that road crews attend to on a daily basis.

There are a number of roadways in Pearl River County.

Each road lies within a county supervisor’s district and as time goes by, these roads will deteriorate, develop potholes and street signage will break.

When county residents see a pothole or other road problem, whom do they call?

District IV Supervisor J. Patrick Lee said that around 1982, the citizens of Pearl River County voted in a units system.

“The unit system requires all five supervisors to work as a whole,” Lee said. “All work is grouped together in one unit.”

Before implementation of the unit system, Lee said, constituents were able to call their supervisor to report road damage. However, under the unit system, all road calls are to be directed to the county barn and reported to the road manager.

Charlie Schielder is the county road manager and said that residents need to call the county barn when they need road repairs.

“I have different offices scattered throughout the county and give work orders to each foreman,” Schielder said. “When people call the office, there are two secretaries that will write down their name, address and will write a work order. The work order is then given to the foreman who will ride out and fix the problem.”

Schielder said there are about 1200 miles of road in the county to maintain and at times, it can take up to a few days to get the problems fixed.

“We try to take care of each and every problem as soon as we can,” Schielder said. “We try to prioritize and if it’s a safety concern, it is immediately fixed by road crews.”

Schielder said the biggest complaint he receives is that the work is not being done quick enough. Road crews follow a daily schedule, but emergency situations do occur from time to time.

If residents see potholes, downed street signs or any other road safety issues, such as the inability to see around an intersection, Schielder asks them to call the county barn at 601-795-8038.