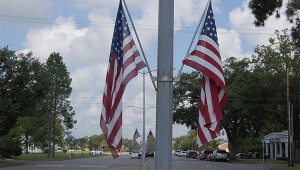 Photo by Cassandra Favre
In remembrance: There are numerous American flags lining the Goodyear Boulevard. Mayor Ed Pinero said flags located around the city will be flown at half-staff in remembrance of September 11, 2001.

It’s a day that will live in infamy in the hearts and minds of Americans for years to come.

Today, political leaders, schools and various other groups will gather to honor the memories of the Americans who lost their lives in the twin towers of the World Trade Center in New York City, the Pentagon in Washington, D.C. and a flight in Pennsylvania.

More than 3,000 people were killed during the attacks in New York and Washington, D.C., including 400 firefighters and law enforcement officers, www.history.com states.

According to the website, at 8:45 a.m. an American Airlines Boeing 767 with 20,000 gallons of jet fuel crashed into the north tower of the World Trade Center in New York. The impact left a hole near the 80th floor of the 110-story skyscraper killing and trapping hundreds.

Eighteen minutes after the first crash, a second Boeing 767-United Airlines Flight 175 turned toward the World Trade Center and crashed into the south tower near the 60th floor, the website states. The second event was filmed live as news outlets covered the first incident.  Less than two hours after the first plane struck, the twin towers collapsed.

The collision caused a tremendous explosion blowing debris over buildings and streets, history.com states. The attackers were Islamic terrorists from Saudi Arabia and other Arab nations and reportedly backed by Osama bin Laden’s al-Qaeda terrorist organization.

According to the history.com, at 9:45 a.m., an American Airlines Flight 77 flew into the Pentagon military headquarters in Washington, D.C. where 125 military personnel and civilians were killed, along with the 64 passengers on the airplane.

United Flight 93 was hijacked 40 minutes after leaving Newark International Airport, the website states. Plane passengers are reported to have made last minute calls to family and to have attacked the four hijackers in the cockpit with a fire extinguisher. At 10:10 a.m., the plane flipped and crashed in a field in Pennsylvania, killing the 45 people aboard.

The remembrance of that tragic day will not go unnoticed in Pearl River County.

Picayune Mayor Ed Pinero said the streets of Goodyear Boulevard are lined with American flags and flags around the city will be flown at half-staff today to pay tribute and respect to the events of 9/11.

“A moment of silence will be held at 8:46 a.m. remembering the initial strike of 9/11,” Ryder said. “All students, staff and administration are encouraged to visit the flagpole and leave a memoriam, say a prayer or plant a miniature flag.”

At 11 a.m. the ROTC will “Makes Eight Bells” on the ship’s bell and play Taps to salute the more than 3,000 citizens who lost their lives that day, Ryder said. At 3:15 p.m., there will be a prayer of remembrance and hoisting of the colors to full-staff.

Ryder said the event is open to all veterans and community members who wish to attend.