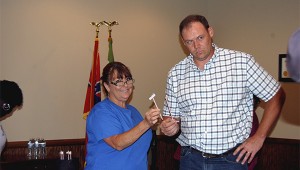 Photo by Cassandra Favre
Stephanie Bounds, left, and Glenn Bolin drew straws Thursday night to determine who would take the vacant Poplarville Board
of Aldermen seat. Bolin drew the long straw, making him the winner. He will take office in early October.

In accordance with Mississippi Law, a drawing of the lot was held Thursday evening to determine the winner of Poplarville’s tied alderman race.

A discrepancy with one of the affidavits kept candidates and city officials on their toes until a single voter brought in their identification to be verified by municipal election commissioners.

The tie stood Wednesday evening after the identification was validated and the lot was scheduled for the following evening.

Gwen Jordan, Michele Lewis and Rhonda were the three election commissioners charged with the task of determining the method of lot and finding two qualified electors of the city to aid with the draw.

The method of draw could have entailed drawing straws, tossing coins or choosing pebbles.

Commissioners chose the drawing of straws for Thursday night’s lot. The candidate choosing the longest straw was declared the winner.

According to City Clerk Jody Stuart, this was the first time, to her knowledge, an election in Poplarville was determined by drawing of the lot.

Alex Kennedy and Carrie Hales served as the municipal electors for the evening.

Prior to the draw, Stuart met with the candidates to review of the instructions.

When the draw began, Kennedy placed six straws in an inverted container decorated with an American flag in the shape of a top hat.

When it was determined that the straws were the same height from the top of the container, Hales numbered each straw.

After the straws were numbered, the container was rotated an unknown number of times to safeguard the draw’s virtue.

The first candidate to pull the straw was determined by alphabetical order of last name.

The straws were held up by the candidates for the public to view.

After the straws were drawn, candidates placed their straws next to each other’s and it was clear that Bolin had pulled the longer straw.

After the candidates signed the lot forms, Jordan placed and sealed the straws in an envelope.

Stuart said the straws will remain sealed for no less than 12 working days, unless a candidate desires an examination of the box.

“I’m glad it’s over with,” Bolin said. “I look forward to serving the city I live in and have a business in. It is my desire to help the city grow, not only for my children but for everyone else’s as well.”

Bounds said she had a great campaign crew and a lot of great supporters in the city.

“I feel very much that this was supposed to happen, it was God’s will,” Bounds said. “Mr. Bolin will have a tough three years, but he will do fine, he’s a good man. Hopefully, people will learn from this and vote for the person they support.”

According to Mayor Brad Necaise, Bolin can attend Tuesday’s alderman meeting, however, Bolin cannot vote until he is bonded. Bolin will be sworn in at the October 7 meeting, which begins at 5 p.m.