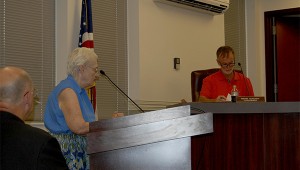 Photo by Cassandra Favre
Constitution Week chairman and member of the Picayune Chapter of the Daughters of the American Revolution Margaret Anne Ulerich read aloud the resolution proclaiming the week of September 17-23 as Constitution. The council approved the request at Tuesday’s city council meeting.

The Picayune City Council heard from local attorney Buddy McDonald at Tuesday’s meeting about the recent passage of a new ordinance allowing the sale of beer and light wine at the Crosby Commons.

McDonald said he was at the meeting representing several area non-profits including The Greater Picayune Area Chamber of Commerce, The Rotary Club, The Exchange Club and Picayune Main Street.

Representatives of these clubs sent a resolution last week to thank the council for approving the new ordinance, McDonald said. It is the groups’ desire to see these resolutions made public and added to the city’s minutes.

However, the groups missed last Friday’s deadline for the resolutions to be added to council member’s packets for Tuesday’s meeting, McDonald said.

The ordinance allows for the sale of beer and light wine during special events held at Crosby Commons and permits would be restricted to registered local non-profit organizations, the Item reported in August.

“The main reason these organizations were in favor of this ordinance is because non-profits spend a good deal of friend’s and family’s money and time raising money to aid needy people,” McDonald said. “Many civic groups feel special event permits give them the opportunity to raise more money to give back to the community.”

The practical aspect, McDonald said, is that some people won’t give money unless groups hold a fair or festival which is something that people want to attend.

In other action the council:

The next city council meeting will be held on Oct. 6 at 5 p.m