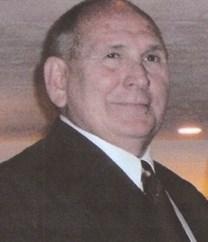 He is preceded in death by his father, Bernard Dice Hensley; and one brother, Gary Hensley.

Visitation will be one hour prior to the services.