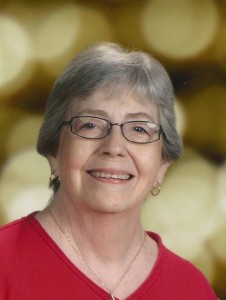 Janet D. Saxby, 72, of Rawlins, Wyoming, passed away suddenly on August 31, 2014, following a relapse of Cancer, surrounded by her family and friends.

Graveside services will take place on Sat. September 6, 2014, at 10:00 a.m. in the Rawlins Cemetery followed by funeral services at 11:00 a.m.at the First Southern Baptist Church at 2005 Darnley Road in Rawlins. Rev. Gene Washburne, pastor, will be officiating. Visitation will be held from 6-8 p.m. September 5, 2014 at the Carbon County Funeral Home at 702 W. Walnut Street in Rawlins.

Janet was born in Shreveport, LA on February 26, 1942. She graduated from Bossier High School as an honor student and continued on to receive a B.A. from Louisiana College, where she served as secretary of her senior class. Later she earned a Library Science and an ESL endorsement from the University of Wyoming.

Janet retired as a school teacher from Carbon County School District in Wyoming. She previously taught in Virginia, Alabama, Louisiana, Texas and Oklahoma for a total of 26 years of devoted service. For approximately 12 years, she wrote Youth Sunday School materials and devotionals for Lifeway magazine. Throughout the years she sold Tupperware and was a top sales representative.

Janet thoroughly enjoyed her grandchildren, traveling, and teaching Sunday School lessons. She was also actively involved in the First Southern Baptist Church which included Youth ministries, Treasurer and Women’s Missions. Additionally, she was a member of Delta Kappa Gamma serving as President and Treasurer. She had lifetime memberships in NEA and WEA and was a longtime member of the Rawlins Community Choir and Handbell Choir.

Janet is survived by her son, Jonathan Saxby and his wife, Tracy, her daughter, Margaret Saxby; grandchildren, Cameron and Quinn Culhane; sister, Sylvia Downes and her spouse, Richard; nephew, George Downes; cousin, Carolyn Seal and her husband, Dale; and numerous other relatives.

In lieu of flowers, memorial contributions may be made to Jubilante Ensembles of Carbon County, Joyful Ringers, P.O. Box 2253, Rawlins, WY 82301.

Tributes and condolences may be offered online at www.carboncountyfuneralhome.com.