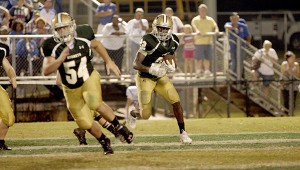 In a stunning finish to a back and forth ball game, the Poplarville Hornets stung the Stone County Tomcats with a two-point conversion in overtime to win the game 43 to 42.

The Tomcats scored the first touchdown of the game in the first quarter with 10 minutes left on the clock.

With six minutes to go in the first quarter, Hornets’ fullback Tyler Fricke scored the first touchdown for the home team tying up the score.

The Tomcats struck back with a 68-yard touchdown with four minutes left in the quarter bringing the lead to 14 – 7.

With 50 seconds left on the clock in the first quarter, Hornets’ wide receiver Will Holliday scored the tying touchdown.

The Hornets began the second quarter with a touchdown by running back Keith Dotson, which gave the Hornets a 21 to 14 lead.

With three minutes left in the first half, the Tomcats scored the tying touchdown.

The Hornets would take the lead early in the third quarter when running back Keith Dotson ran the ball in for another Hornets touchdown with seven minutes left in the quarter.

With three minutes to go in the third, the Tomcats once again ran the ball to the end zone to tie the game 28 – 28.

In the fourth quarter, the Hornets once again took the lead with a touchdown by running back Keith Dotson, which took the Hornets up to 35-28.

With seven minutes left in the game, the Hornets fumbled the ball, which was recovered by the Tomcats.

The Tomcats took this opportunity to maneuver another touchdown once again tying the game 35 to 35, with the successful extra point.

With 11 seconds left in the game, Hornets’ kicker Nicholas Kirschbaum attempted a field goal, but it was no good, forcing the game into overtime.

The Wildcats scored on their first overtime possession bringing their score up to 42.

In the second possession of overtime, the Hornets scored a touchdown.

In lieu of the extra point, Hornets’ running back Keith Dotson ran the ball in for a two-point conversion, clinching the game for the Hornets.

“I’ve never been more proud of this team,” Hornets Coach Jay Beech said. “We had four to five starters that handled well in the first quarter. This team just kept on fighting. It was an unbelievable win against a great opponent.”