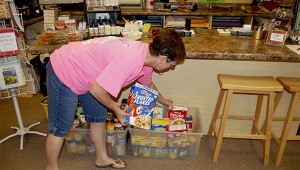 Melinda Shaw, owner of Melinda’s Fine Gifts and More, collects food every year for the food banks in PIcayune.
Photo by Cassandra Favre

Most household cabinets and refrigerators are stocked with a variety of food items that can be acquired at any time.

However, for a variety of reasons, some families are unable to provide proper nourishment for their loved ones.

One Picayune businesswoman is doing her part to ensure the hungry families in the community have access to food.

For the past three years, Melinda Shaw, owner of Melinda’s Fine Gifts and More, has sponsored a food drive at her retail locations.

“Three years ago, I watched the Food Network’s documentary  “Hunger Strikes Home”, Shaw said. “The program focused on three families and their reliance on food banks in order to prepare meals. There was a single recently unemployed father who relied on food banks to feed his children.”

Shaw said that not only did the documentary focus on family struggles but also on the food banks that, for the most part, rely on donations.

It was an eye-opening experience, Shaw said.

“It wasn’t until I saw that show that I realized there are regular people going through tough times and having to explain to their children why there’s no milk for their cereal,” Shaw said. “I myself take for granted food availability.”

After watching the program, Shaw said she began to research food banks and soon found at least five in Pearl River County.

Shaw said she made contact with the food banks and compiled an email list and began inviting people to watch the video.

Shaw held her first food drive after Hurricane Issac and she said even though there were so many people in need, a number of community members stepped up to the plate to help needy families.

Shaw said she generally collects enough food items at her stores to make about four loads in her SUV.

There are two Melinda’s locations where people can drop off non-perishable food items for the local food banks.

The first location is at 1 Sycamore Rd. Suite B by Paul’s Pastry. Food can be dropped off during normal business hours, which are Monday through Friday from 9 a.m. to 6 p.m. and 9 a.m. to 5 p.m. on Saturday.

The second store is located in downtown Picayune at 109 West Canal St. and is open from 9 a.m. to 5 p.m. Monday through Friday.

Shaw will be collecting food at her stores until Saturday, Sept. 27.

When customers drop off food then can receive a 20 percent discount on their entire purchase as thanks for support, Shaw said.

“Our community is full of wonderful and caring people,” Shaw said. “If one child doesn’t have to go sleep hungry then we’ve made a difference.”

There are a number of local food banks in the Pearl River County area including:

The documentary “Hunger Hits Home” can be viewed on the Food Network’s website at www.foodnetwork.com/videos/hunger-hits-home-0183570.

Learn more about hunger in America at www.feedingamerica.org.