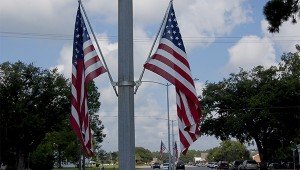 Photo by Cassandra Favre
There are a number of American flags lining Goodyear Boulevard in Picayune. According to Daughters of the American Revolution member, Margaret Anne Ulerich, the flags will fly all week to commemorate Constitution Week which lasts from September 17-23.

The Constitution is one of the most important documents in United States history.

September 17-23 is known as Constitution Week, a tradition started by the Daughters of the American Revolution.

Margaret Anne Ulerich is a member of the Picayune chapter of DAR and serves as the chairman of Constitution Week.

“The DAR was founded in 1890 by a group of women who wanted to preserve the history of the American Revolution and the events,” Ulerich said. “The organization promotes restoration and preservation projects.”

The American Revolution was fought from 1776 to 1781, Ulerich said.

According to history.com, the American Revolution was fought due to tensions between Britain’s 13 North American colonies and the colonial government, which represented the British crown.

The DAR was instrumental in establishing the Natchez Trace, Ulerich said, which runs from Jackson to Natchez. In Washington D.C., the DAR owns Constitution Hall, the only privately owned historical building in the nation’s capital. They host cultural events there and the Continental Congress, which is the annual national meeting of the DAR, Ulerich said.

According to Ulerich, President Dwight D. Eisenhower first declared this time of the year as Constitution Week in 1954.

“This week commemorates the drafting of the Constitution in 1787 and promotes remembrance of the important document,” Ulerich said. “It’s the oldest and longest lasting Constitution in the world. It is the sole basis for how government should be run.”

The Constitution established the checks and balances system for the three branches of government, Ulerich said.

Ulerich said each year she visits schools and local government offices and hands out posters and literature pertaining to the week of celebration.

According to Ulerich, the Picayune DAR supports the veterans in the area through wounded warrior, distribution of Christmas cards to veterans’ homes and hospitals. The group also sponsors programs that bring attention to remembrances of important historical dates in the nation’s history.

“This Saturday City Manager Jim Luke will speak at our meeting,” Ulerich said. “He will be providing updates about the historic progress in the city of Picayune. The event is open to the public and will begin at 10:30 a.m. at the Crosby Library in Picayune.”

Ulerich said the DAR would love to have new members.

Perhaps the most major deciding factor regarding membership, Ulerich said, is the genealogical records search.

“The records must be traced back to patriots who served in the American Revolution,” Ulerich said. “It doesn’t have to be a soldier, family members could have served the Revolution in a variety of capacities.”

Learn more about DAR at www.dar.org.