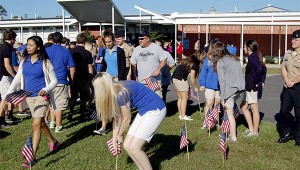 Photo by Cassandra Favre
The students at Pearl River Central High School remembered the lives lost during the 9/11 attacks on the World Trade Center in New York City in 2001. After the ROTC lowered the flag half staff, students were invited to place American Flags in the ground around.

The students at Pearl River Central High School took a moment Thursday to remember the victims of the September 11, 2001 attacks on the World Trade Center in New York City.

The morning began with a moment of silence at 8:46 a.m., which marked the initiating strike of 9-11, Senior Naval Instructor PRC NJROTC Colonel Todd Ryder said.

The school’s NJROTC lowered the flag to half-staff as students and community members looked on with hands held over their hearts. At the end of the morning service, students were given American flags to place in the ground around the flagpole.

Kevin Richoux’s 16-year-old daughter Lauren is a member of the school’s NJROTC program and Richoux said he was proud of his daughter’s participation in the commemoration.

“It was such a tragedy and heartbreak for the family members that suffered losses,” Richoux said. “It was a very sad day, one where we didn’t know if the world was going to end or not.”

Many of the high school students were toddlers on that day 13 years ago.

Fourteen-year-old Brock Revels said this event was held to show respect for the people who lost their lives during the attacks.

“I learned about 9-11 in about the seventh or eighth grade,” Revels said. “I always wondered why this day was such a special day to remember. My teachers showed us videos and news footage of the attacks. It was such a terrible thing to do to innocent people.”

Sixteen-year-old John Sherrill said 9/11 was not a great time for the country but Americans displayed spirit and came together to support each other.

“This commemoration celebrates the spirit of a community when people come together to remember,” Sherrill. “My dad is a Navy Veteran. It feels great to participate in this.”

Students and guests were invited to ring the ship bell in front of the flagpole, Ryder said. President Barack Obama requested the ringing of bells nationwide in his presidential proclamation.

PRC High School Principal Stacy Baudoin said she is proud of the NJROTC students for preparing the sequence of events for the 9/11 commemoration.

“9/11 is a day that we always need to remember as Americans,” Baudoin said. “And our NJROTC helps us to do this. Our teachers spent the day teaching our students the significance of 9/11 and how life changed for us after the attacks.”

At 11 a.m., the ROTC rang the ship’s bell and played taps, Ryder said. This signified the end of the watch and honored the 3,000 lives lost on that day. At 3:15 ROTC Chaplin offered a prayer of remembrance and the flag was hoisted to full staff while the National Anthem was played, Ryder said.