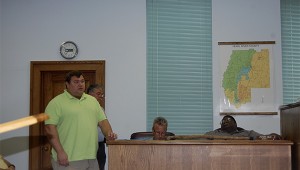 Photo by Cassandra Favre
Jason Ulmar with Dungan Engineering gave the Pearl River County Board of Supervisors the engineer update in the absence of county engineer Les Dungan at Wednesday’s meeting. It was noted that the final right-of-way purchase has been completed that will allow the rerouting of Richardson Ozona Road to commence.

District V Supervisor Sandy Smith said he has received many complaints from constituents about the Ozona Flea Market regarding the storage of merchandise in the right-of-way.

The flea market is located in the Ozona community on Highway 11.

Pearl River County Planning and Development Director Ed Pinero told supervisors he had advised the owners about the complaints.

“If the merchandise is in the MDOT right-of-way, they have the authority to make the owner move it,” Hales said.“People could get into an accident by running into his merchandise.”

Pinero told the board he would confer with MDOT about the situation.

Last month, Pearl River County Hospital Board trustee Dr. Rita Jones retired from her position on the board.

Hales announced the fulfillment of her position at Wednesday’s supervisor’s meeting.

“Sherman is an inventory clerk for Pearl River County,” Hales said. “He is a former Poplarville alderman. He is a good man with a strong desire to do things right.”

Hales said Sherman pays close attention to detail and is confident he will do a good job.

“Any concerns raised on any level he will spend the time to research,” Hales said. “He is a man of the highest character with a calm demeanor that will work well.”

In other action the board approved:

The next meeting will be held on Monday, October 6 at 9 a.m.