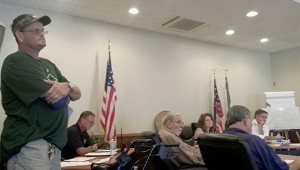 Photo by Cassandra Favre
Poplarville’s code enforcement officer, Guy Ray, held a public hearing at Tuesday’s Board of Alderman meeting. The hearings concerned his analysis of blighted properties around the city.

The Poplarville Board of Alderman met and held public hearings for blighted properties and approved the matching funds of $11,766 for a Poplarville airport grant during Tuesday’s meeting.

Guy Ray, code enforcer for the city of Poplarville, conducted the hearing on a few of the derelict properties around the city.

Only one property owner was in attendance, James Seal, owner of 430 N. Main Street.

Seal said he no longer lives in the area but his intentions are to clean up his property as soon as possible.

Mayor Brad Necaise said the city is willing to work with Seal to get the property cleaned up.

Board member Maggie Smith said part of the problem involved a pile of debris that rodents had infested. Certain kinds of debris can be picked up by the city.

Necaise said he would send Seal a detailed list of city pick-up fees and services.

The aldermen approved notifying the property owners of 111 Poplar Dr. and 108 Camellia Dr., of a 30-day time frame to clean the properties or the city would cleanup the property themselves.

The board approved providing matching funds for an airport grant award.

Bradley Holiday, president of the airport board, said the grant will be utilized for the construction of four hangers and a taxiway, in  an attempt to acquire income generating property.

Holiday said the city and county pay half of the Poplarville Airport’s bills. The total grant amount is $470,667. The FAA will pay ninety percent, the Mississippi Department of Transportation will pay five percent and the remaining $23,533 will be divided between the city and county.

“There’s been a lot of work done to the airport in the past few years,” Holiday said. “The problem with the airport has been that the average person thinks it’s just for recreation. I also have pilots inquiring about courtesy car services to take them into Poplarville.”

Holiday said the airport sees about five to ten aircraft a day and most passengers want a ride into town.

“If you’re ever going to get any kind of industry to come to Pearl River County, you’re going to need the airport,” Holiday said.

The hangers will be a revenue-generating tool, Holiday said, and will help the airport become more self-sufficient.

Holiday said that the county had already approved the match, and once the grant is awarded, construction would take about six to eight months.

The next Poplarville Board of Aldermen meeting is Tuesday, Sept. 9 at 5 p.m.