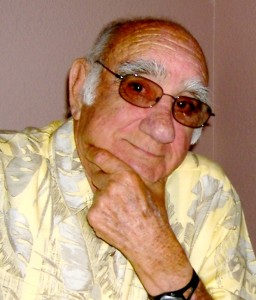 The family of Monty Clark invites those who knew and loved Monty to join them on Sunday, Sept. 7th from 3:00 – 5:00 for a “Celebration of a Life Well Lived”. The celebration will be held in the family home at 195 Monty Clark Road, Carriere, Miss.

On Tuesday, August 26, 2014, Alden L. “Monty” Clark passed away peacefully at home in the very house he was born in 80 years before, on January, 16, 1934. He was preceded in death by his parents, M. P. Clark and Mary Dell McNeill Clark; his sisters, Dorothy Dell Stewart and Carolyn Jo Kukowsky.

Monty made life interesting and was known to bring joy, smiles and laughter to his world. He transferred from Carriere to Picayune school in the 7th grade because he was determined to play football and Carriere had no team.

He was told he was too big for the Peewee team so he tried out for the High School team and made it as a 7th grader. He lettered in the 8th grade and every grade after making him a five-year high school team letterman by his senior year. Monty was proud of his jacket with five stripes and enjoyed the lifelong friendships he formed with fellow teammates.

Monty attended Pearl River Junior College for two years with plans to enter veterinary school at Auburn University. When his father died, he left school to return home and help his mother by running the family farm.

Monty married the love of his life, Joan Moore, on December 30, 1954. Their first child, Loraine, was born in 1957 and Boyce was born in 1968. He farmed pecan and tung orchards and raised cattle and sheep. In 1969, Hurricane Camille destroyed the tung and pecan orchards so Monty became a part time farmer and went to work for the Hide-A-Way Lake developer as the property manager in the early years of the development. Later, he became the Vice President of Dixie Farm and Road Supply to include management of Poplaville Sales.

When Hide-A-Way Lake was turned over to the property owners, Monty returned to become the Community Manager. He obtained his Professional Community Association Manager status while at Hide-A-Way Lake and hosted the national Home Owners/Property Owners Association conference. Monty truly enjoyed the challenges and rewards of working with the property owners and made a lasting positive impression on so many he knew.

He loved to hunt and fish and belonged to the Mikes Island Hunting Club as well as the “Go-Downers Club” (as in go down the river). He was known for his camp cooking skills and loved to make “cat head” biscuits and Jarrell Creek slaw.

To sum Monty up in a few words, he was a devoted husband, father and grandfather. He loved to have fun and pass many a good time. Monty was truly a “people person”. He made the world a happier place and brought joy and laughter to everyone he met.