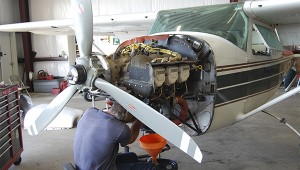 Photo by Cassandra Favre
Michael Shallbetter owns Better Air ,LLC and his business is located at the Poplarville-Pearl River County airport. He works on a variety of airplanes, including this plane that is used for skydiving lessons in Slidell, La.

There are many benefits to building an airport within a city’s limits. It can create jobs, stimulate the local economy and offer a unique recreational outlet.

Bradlley Holliday, president of the Poplarville-Pearl River County airport board, said he is confident the Poplarville airport will one day become self-sufficient.

Currently, the airport receives funding from the city and county every year, Holliday said.

Poplarville city attorney Martin Smith was the first chairman of the airport board in 1968. The airport was built in the early 1970’s, Smith said.

“Back then it was believed that if a city wanted industrial development an airport was required,” Smith said.

Holliday has served on the airport board for the past seven years and said he has always had an interest in aviation. He is also a pilot and said he flies helicopters and planes. The airport board is an advisory board comprised of five members and meets once a month to discuss airport maintenance, grants and other issues that are then taken to the aldermen and supervisors.

Holliday said the Poplarville airport is used for both recreational and business use.

“There are state crop dusters who fly in and spray the pine trees,” Holliday said. “We have visitors fly in specifically to shop at local businesses in Poplarville. Pearl River Community College scouts also fly in and out of the airport.”

The airport has a 4,000 foot long and 150 foot wide runway, Holliday said. There are currently five hangars at the airport and a newly built main office, which the county utilizes as a voting precinct.

This week, the Poplarville Board of Alderman approved matching funds for a $470,000 airport grant.

Holliday said the grant will be utilized for the construction of four hangars and a taxiway.

“The plan is to become self-sustaining,” Holliday said. “The more hangars we have, the more revenue can be generated and we wouldn’t have to go to the city and county for funding.”

Holliday said the airport sees a good bit of air traffic on the weekends and a local remote control aircraft club meets to fly their planes on the grounds.

In the upcoming months, Holliday said the airport will have a GPS approach system, which will allow pilots to land in inclement weather when visibility is bad.

Shallbetter is an airplane mechanic and specializes in antique and exotic plane restorations. He also does general maintenance on all types of planes.

“The airport has been busy,” Shallbetter said. “People from several different states bring their planes to me for maintenance.”

“They are friendly people at this airport,” Gramley said. “The runway was recently resurfaced and they built a new terminal.”

In a July Mississippi Department of Transportation news release, it was announced that a recent study showed that the state’s 73 airports generate more than $2.5 billion annually in economic activity, which improves the life of residents in airport communities.

“We welcome any kind of industry to the airport,” Holliday said. “We are open to any new ideas that would help this airport become a self-sustaining entity.”

If anyone is interested in receiving flying lessons from Cool Breeze, contact Gramley at 228-343-6936 or through email at flywithcba@aol.com.

Learn more about MDOT at www.GoMDOT.com.