A twist on a beloved holiday ballet 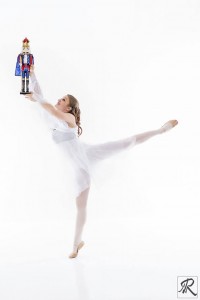 Photo by Marty Ratcliff
Last year’s production of the Nutcracker was a success, E. Jae James of Xfi nity Dance Academy
said. In addition to the primary roles of Clara and her Nutcracker, James aims to incorporate other main
characters and varying styles of dance.

There are many magical and memorable traditions associated with the Christmas holidays.

These traditions include, caroling, festivals, Christmas trees, manger scenes, family gatherings, presents under the tree and of course that jolly old Saint Nicholas.

Perhaps one of the most well known Christmas tradition is the stage production of E.T.A. Hoffman’s story “The Nutcracker and the King of Mice.”

According to nutcrackerballet.net, the first showing of the Nutcracker ballet was in 1892 at the Marlinsky Theatre in Russia. The ballet was introduced in America in 1940. The story centers around Clara, a young German girl who dreams of a Nutcracker prince and a battle against a mouse king.

This Christmas, residents in the city of Picayune will once again have the opportunity to witness the city’s local talent in The Nutcracker with a twist.

E. Jae James is the owner of Picayune’s Xfinity Dance Academy and a member of the Greater Picayune Arts Council, which is one of the sponsors of this year’s show. Open auditions for the show begin today.

James said last year’s inaugural production of the Nutcracker was a success and ran smoothly with a great turnout to both shows.

This year, James said, the Nutcracker will be produced with a twist.

“We will still adhere to the traditional story,” James said. “But we are going to add a little flair utilizing different dancing styles and underlying storylines.”

James said incorporating new styles and characters will bring the story up to date and appeal to today’s generation of young adults.

Along with traditional ballet, James said, there will be many other dance styles incorporated into the production including, hip-hop, pointe, jazz, lyrical, contemporary, tap and acrobatics.

“This production will integrate all the local dance studios,” James said. “Each one has a signature style and will all play a part. This will make it more of a community event.”

In Picayune, Christmas is a major event, James said.

“It is our hope to bring the community together in joy and happiness this holiday season,” James said. “At Christmas time, people become children again. Not only does this show bring awareness to the arts, participation in this production means because it shows that people can have positive relationships with each other in the community.”

This year’s production is sponsored by the Greater Picayune Arts Council, Dance Art Dance, Main Street of Picayune, city of Picayune and the Chamber of Commerce.

Open auditions will be held on Saturday, Sept. 13, Saturday, Sept. 20 and Saturday Sept. 27 at the St. Paul Episcopal Church fellowship hall at 1421 Goodyear Blvd. There are different audition times for each age group:

There will be a $10 audition fee, James said.

James recommends arriving about 10 to 45 minutes early for registration and dressing in proper dance attire or comfortable clothing.

For more information contact 601-347-1321 or by email at picnutcracker13@yahoo.com and through Facebook at The Nutcracker Picayune, MS.