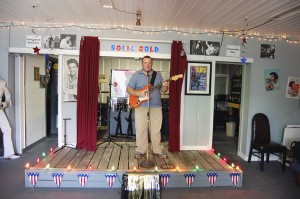 MUST GO ON: Tim Burns began learning to play the guitar when he was four-years old. His love of music is what inspired him to open Picayune’s Sold Gold Theater.
Photo by Cassandra Favre

When he’s not trimming hair at Picayune’s Burn’s Barbershop, owner Tim Burns is rocking and rolling next door at his theater.

Burns was born and raised in Picayune and discovered a love for playing musical instruments at the age of four, when he began playing the guitar.

Burns plays a variety of instruments including the piano, drums and bass and steel guitars.

In 2008, he moved to Knoxville, Tenn. and began playing in the Ciderville Music Barn, a Cas Walker establishment where Dolly Parton got her start, Burns said.

When his grandmother fell ill, Burns moved back to Picayune, where the longing for a theater venue grew and grew, and three months ago that’s just what he did.

“I felt the city of Picayune needed a good, clean place to bring their children. A place where good Christian people can come listen to music,” Burns said.

The theater is smoke and alcohol free and features a dance floor, stage and band area and concessions.

At every show, Burns sells raffle tickets for a 50/50 drawing and the winner is announced during the intermission.

“I’ve always wanted to entertain people. I started out playing music in church and I still do. There are so many bar rooms that only adults can go to, but here the kids can come too,” Burns said.

Marlene Meile said she has attended two or three shows and found them to be fun.

“My husband and I love the oldies and Elvis. I think it’s great for people to have some place to go on a Friday night with good decent people,” Miele said.

Burns is “happily married” to his wife Missy and they have six children with one on the way.

Two years ago, Burns said, his son Jaxon was the first baby born at the new Highland Community Hospital.

“I’ve always had a love for music. God comes first, second is my wife and children and music is right up there,” Burns said.

Admission is $6 for adults, $10 for couples, $2 for children ages eight to twelve years and children 8 and younger are free.

Find the theater on Facebook at Solid Gold Band.