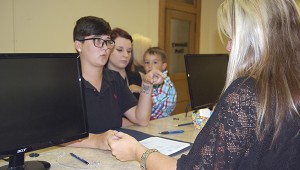 A Picayune couple, on Wednesday, became the first same-sex couple to record their out-of-state marriage license with Pearl River County.

Jenna Lockwood, 27, and Whitney Brown, 23, along with Brown’s 2-year-old son Noah, walked up the courthouse steps, into the Chancery Clerk’s office and officially recorded their New York marriage license.

Same-sex couples in nine Mississippi counties recorded their out-of-state marriage licenses at local Chancery Court offices on Wednesday, according to a press release from the Campaign for Southern Equality.

According to the press release, the Campaign for Southern Equality, based in the south, is a national effort to assert the full humanity and equality of lesbian, gay, bisexual and transgender people in American life and to increase public support for LGBT rights.

Lockwood and Brown were married on June 26 in New York.

The couple said they have known each other for about 10 years.

“We started dating about a year ago,” Brown said. “We knew right away we wanted to get married.”

Lockwood proposed at Audubon Zoo in New Orleans, La. and lined the zoo with signs for Brown to follow.

Both families were present and Brown’s nieces and nephews held signs that read, “Will you marry me?” Brown said.

Both women said their families are very supportive of their union.

Lockwood said Wednesday’s court filing was about the legality of it all.

Mississippi is a right to work state, Lockwood said, and she finds it troublesome to think that she could be fired for being in a same-sex relationship.

“I have taken care of Noah, my rights could be taken away if something happened to Whitney,” Lockwood said. “Gay couples need rights.”

Brown said the couple has not experienced negative reactions from people in the community.

“The act of recording our license says we live here, we’re your friends, family and neighbors, we pay our taxes and we got married,” Brown said. “We want people to know it’s ok whom you choose to you love. Love is a wonderful thing and everyone should experience that.”

“We are required to record any document people bring in,” Burge said. “And as far as I know, they are the first same-sex couple to record their marriage in Pearl River County.”

Burge said the couple’s marriage record will be kept in the miscellaneous documents book.

“Couples are recording their marriage licenses to create a public record of their love and commitment. LGBT people in Mississippi and other southern states simply cannot keep waiting for equality. There is an urgent need for legal protections for families and individuals in Mississippi, and so we are calling for laws to change as quickly as possible to ensure that, no matter what state you live in, you are treated as a full and equal citizen,” Rev. Jasmine Beach-Ferrara, Executive Director of the Campaign for Southern Equality said in a press release.

Learn more about the Campaign for Southern Equality at www.southernequality.org.