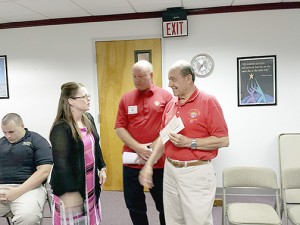 DONATION: At left, Diane Wise, exceptional education director, accepted a check in the amount of $2,000 from Bryan Cassange and Ron Sperier of Picayune’s Knights of Columbus. The money will be used for the Picayune School District’s special education program.
Photo by Cassandra Favre

The Picayune School Board accepted a number of donations to further the educational opportunities offered the district’s students during Tuesday’s meeting.

Picayune’s Knights of Columbus Council members Bryan Cassagne and Ron Sperier presented the board with a check in the amount of $2,000 to be used for the intellectually challenged children of the school district.

Cassange said the money was raised at the Knight’s spring can shake and tootsie roll drive.

“This is a national program the Knights have conducted for years,” Sperier said. “All the proceeds go to adults and children who are intellectually challenged.”

The Knights also donated $2,000 to the St. Francis Bridgeway apartments.

Cassange said St. Francis is a ministry of the Episcopal Church that helps intellectually challenged adults, most of which have no family left to care for them.

The board accepted grants from the Lower Pearl River Valley Foundation.

The grants will fund the following projects:

•The Kindle living literature project in the amount of $6,569.58 to Peggy Williams, teacher at South Side Elementary School.

•Lights, Camera, Action on the Green Screen in the amount of $2,999.81 to Alicia Verweiz, gifted teacher at Roseland Park Elementary School.

•Excavating with digital archeology: Research the dig in the amount of $2,995 to Sheryl Hughes, gifted teacher at West Side Elementary School.

The board approved a request to apply for an Early Head Start expansion grant.

Lisa Penton, the district’s director of finances, said the program is for low-income parents.

“The funds come from the federal government,” Penton said. “Our goal is to educate them and hopefully keep them in our system. Early Head Start education is so beneficial.”

Penton said they have more than 72 students on a waiting list.

The total of the proposed grant is for $1.8 million.