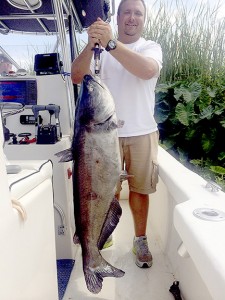 First time Legett tournament participant Justin Sova reeled in a 57.2 pound catfish and he said it took him only about 15 seconds.

Sova said they were catching about 50 pound amberjacks, but they weren’t big enough to qualify for top spots.

The crew switched to catfish and Sova said it was a move that paid off.

“At first I thought it was an alligator gar. We got it on the boat and I said that’s our ticket right there,” Sova said. “We tried to weigh the catfish on our boat, but it broke the scale.”

Sova said he was hoping to place at least second or third and did not think he would “smash” a 20-year record.

“The current record was about 43 pounds,” Sova said. “I received a hand-carved wooden plaque and $1,000 for the first place catfish.”

Sova said it was worth it and he felt like a celebrity. Children and tournament goers paid a lot of attention to the record-breaking catfish.

Sova used 100 pound fishing line and an offshore spinning reel and rod to bring in the catfish.

Sova’s boat is a 27-foot Ameracat.

“It’s a cool boat and handles offshore waves well. It’s a really good riding boat and I’m sure we were drawing attention in the Mississippi River,” Sova said.

When hunting for catfish, Sova advises other fishermen to watch the current.

“You want some current, but not a lot. Look for deep holes in bends of rivers next to shallow flats,” Sova said. “We also use Ivory soap on the river for running trout lines because the catfish smell the fat.”

Sova was born and raised in Picayune and said he started fishing at the age of six.

His father was a member of the Picayune bass club and introduced Sova to fishing tournaments, and he’s been “hooked” ever since.

Sova said his youth was spent fishing in area ponds and lakes and at the Old River Wildlife management area.

Justin is married to Natalie and they have a 19-month old daughter, Ana Grace.

Sova said his daughter is already a boat lover and he is “just itching to take her fishing.”

He plans to enter the tournament again next year.

According the tournament’s website, Carl Legett was born and raised in Gulfport.

Legett owned and managed Carl Legett Builder, Inc. and was a member of the Home Builders Association of the Mississippi Coast.

After his death in 1995, the Home Builders Association of the Mississippi Coast established the fishing tournament in his honor, the website states.

The Home Builders Association of the Mississippi Coast is a non-profit organization that promotes quality and affordable housing for families in the Mississippi Gulf Coast area.

Learn more about the Home Builders Association at www.hbamscoast.com.

Learn more about the tournament at www.carllegett.hbamscoast.com and Facebook at Carl Legett Memorial Fishing Tournament.