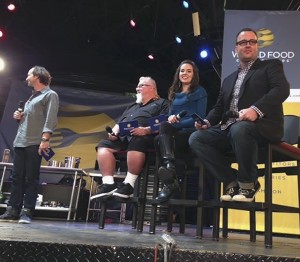 PRIME TIME: “MasterChef” winner Whitney Miller recently judged the “World Food Championship” on the FYI network in November. The show airs on Thursdays at 9 p.m. central and the finale is scheduled to air on August 14.
Submitted photo

Poplarville native and the inaugural winner of Fox’s reality cooking show “MasterChef” Whitney Miller was recently a judge on FYI’s “World Food Championship.”
In November 2013, food competitors from around the world met in Las Vegas, Nev. to compete in seven different food categories.
Categories include, baking, barbeque, burger, recipe and dessert.
Miller said a former “MasterChef” competitor contacted her about becoming a judge.
Miller was one of three judges on the show and judged each category.
There were three rounds and the winner of the first two rounds in each category went on to compete in the final, Miller said.
“I judged 70 portions of food in one day,” Miller said.
Miller plans to return as a judge for the second season.
In 2011, Miller released her first cookbook, “Modern Hospitality: Simple Recipes with Southern Charm.”
Miller is currently working on her second cookbook, which will feature international dishes with a southern twist.
“I wanted to make these recipes more approachable. Most are common ingredients making it less intimidating to try to cook or eat,” Miller said.
She also travels, hosts cooking demonstrations and classes and works with food companies and magazines developing recipes.
She recently began a new project as consulting pastry chef for the new downtown Hattiesburg, Miss. restaurant, Vicki’s on Walnut.
Vicki’s on Walnut is located at 115 Walnut St.
Miller said she designed the dessert menu, which includes two of her desserts; white chocolate bread pudding beignets with raspberry sauce and creamy lime pie.
Miller can now add wedding planning to her to-do list.
On July 4, Miller accepted Ryan Humphrey’s proposal of marriage.
Miller met Humphrey at a culinary event in his hometown of Plant City, Fla. where she was a guest.
“World Food Championship” airs on Thursdays at 9 p.m. central time.  The finale of the show is scheduled to air August 14.
Learn more about the cooking championship at www.worldfoodchampionships.com.
Follow Miller on Facebook at Whitney Miller-Masterchef and www.whitneymillermc.com.