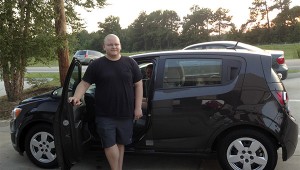 Submitted photo
Brandon Balli is the oldest of nine children and before Aug. 23, he had never owned a car. Balli won the free car giveaway at Mossy of Picayune.

Almost every teenager dreams of owning a car as soon as the ink is dry on their driver’s license.

If they’re lucky, a teenager’s parents can afford to buy them a vehicle.

However, for some families, there are other financial priorities in the household and an automobile may not be one of them.

Twenty-one-year-old Balli is the oldest of nine children. For years, Balli dreamed of owning a car, he said.

“If you have one or two children, then one may be able to pay for all their wants,” Balli’s mother Jennifer said. “When you commit to a large family you aren’t able to give them everything they may want.”

That dream came true courtesy of a giveaway sponsored by Mossy of Picayune and radio station Kicker 108.

Balli said his sister Leah gave him the golden tickets to complete in order to enter the contest.

There were about 465 entries submitted to Mossy, Balli said. The first 60 names called were the recipients of gift certificates to local businesses and the final name called was for the car.

“When his name was called he was calm as he could be,” Balli’s grandmother Flo Wiese said.

Balli is now the proud owner of a black 2014 Chevrolet Sonic hatchback worth about $16,845.

“It’s a different feeling,” Balli said. “I don’t know if my family has ever owned a new car, we always buy used.”

Balli is a senior at the University of Southern Mississippi and is majoring in business administrative management.

After graduation, Balli said he plans to attend graduate school to acquire his MBA. He has hopes of working for a technology-based company such as Microsoft or Google one day.

He is also the recipient of a Luckyday Scholarship.

“When we were looking at colleges,” Jennifer said. “We were debating between the costs of USM and junior colleges, but when he got this scholarship, we knew we could send him to USM.”

Before owning his own car, Balli said he rode the shuttle back and forth from his apartment to attend classes on campus.

Jessica Dawkins, Balli’s girlfriend of almost three years lives in Columbus and Balli said he would take the train to visit her.

“We are just so excited for him because we can’t afford to buy him a car,” Jennifer said. “He has always been a bright, mature and motivated young man with the strong will to do well and succeed.”

Louis Wiese, Balli’s grandfather, said he has always been close to his first grandchild.

“This moment just topped my list of exciting moments,” Louis said. “It was almost as big of a moment as when Hartley kicked the field goal that sent the New Orleans Saints to the Superbowl.”

Before heading to Saturday’s giveaway event, Louis said Balli was hesitant about attending.

“I told him I’ll make you a bet,” Louis said. “If you win, I’ll pay the taxes on the car, never thinking he would win.”

Jennifer said that not only is the car paid for, the dealership also gave her son two years of complimentary oil changes and tire rotation, along with a warranty.

“When he finishes school, he will have to have a car,” Jennifer said. “It’s great that he has this car now. It will continue to be an asset to him for a long, long time. It was such a generous thing for Mossy to do.”

Balli said the staff at Mossy was nice, even staying after hours while he secured car insurance.