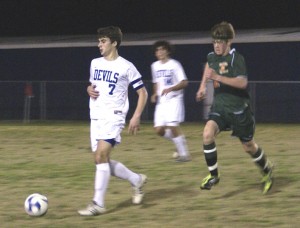 MOVING AHEAD: AJames Pipper (7) was recently selected to attend the Geneva International School of Soccer in Asiago, Italy to train with professional soccer players from all over the world. During high school he played soccer for the Pearl River Central Blue Devils.
Submitted photo

A Picayune soccer player recently completed a two-week training session in Asiago, Italy where he played soccer with professional players from all over the world.

20-year-old James Pipper said he began playing soccer at the age of four.

“My parents signed me up to play and I just stuck with it,” Pipper said.

Local business owner Tony Schibeci has coached Pipper since he was 12-years-old.

Schibeci is a scout for the Genova International School of Soccer.

“It’s an academy in Italy where players train and try out for professional teams,” Schibeci said.

According to the website, The Genova International School of Soccer (GISS) provides a pathway for players around the world to play professional soccer in Europe.

The organization was started by ex-professional player, Morris Pagniello.

GISS provides a professional approach to training, standard technical knowledge, raises the standards of players to compete at an elite or professional level, creates a bridge for soccer players to access European teams and to place players in professional or semi-professional teams throughout Europe, the website states.

“Tony is a good coach,” Pipper said. “He has helped shape the player I’ve become.”

According to Pipper, 22 players were invited from all over the world to play against professional teams to gain experience.

Pipper left for Italy on July 19 and returned home August 2.

“It’s been a humbling experience,” Pipper said. “I’m used to being the better player, but there are better and more professional players over there.”

Pipper plans to return to GISS in a month to spend another three months becoming more acclimated to how professionals play.

“This is a great opportunity for him to experience and play with professionals,” Pipper’s father Matthew said.

Pipper said if professional soccer doesn’t pan out, he will attend Mississippi State University to pursue a degree in kinesiology, which is the study of the body and its movements.

“It’s been a really good experience and eye-opening to see what different level the game is played on in Europe,” Pipper said.

Learn more about GISS at www.gissamerica.com and through Facebook at Genova International School of Soccer.