Fundraising tournament to be held Saturday for Friendship Park 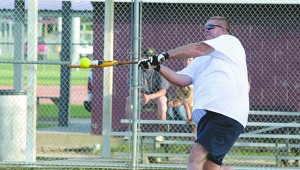 TOURNAMENT: In this file photo a participant hits a softball. This Saturday a softball tournament will be held to raise funds to help fund operations and repairs at the park.
Photo by Jeremy Pittari

The Parks and Recreation Department of Picayune will host its inaugural “Playing for the Parks” this Saturday.

The event is a co-ed adult softball tournament to benefit Friendship Park, Heath Stevens Director of Parks and Recreation said.

Stevens said donations are being raised to fund a number of repairs at the park.

“The park needs new field dirt and there are some lighting issues.” Stevens said. “We need more bathrooms and some are in need of repair.”

Stevens said several other items are needed including a new four-wheeler.

The parks and recreation department is reaching out to local businesses to ask them to either sponsor a team or purchase a small golf sign to be displayed during the tournament, Stevens said.

“We are trying something else, instead of reaching directly into our budget to acquire items for the park,” Stevens said. “Budgets are tight, so we decided to try and raise the funds on our own.”

The cost to sponsor a team or register a team is $500, Stevens said. This donation also includes a 4×8 business sign that will be displayed at the park for one year.

Stevens said if a business pays for a sponsorship, but does not have their own team, he will use a local team.

The cost for a small golf sign is $100, which will be displayed just during the day of the tournament, Stevens said.

Friendship Park is the biggest and only sports complex in the city, Stevens said. There are 15 softball and baseball fields, a football and soccer field, tennis courts and Kids Kingdom, which is the biggest local playground.

“The park keeps children off the streets,” Stevens said.

The more visitors to the park, the more people will patronize local businesses, Stevens said.

“We help them, they help up,” Stevens said.

Stevens said Friendship Park benefits the community by keeping everyone safe and healthy.

“Our community is extremely giving,” Stevens said. “And the park is utilized so much.”

Mayor Ed Pinero said this tournament is going to be a great help to the future development and growth of Friendship Park.

“Heath has done a great job developing ideas and opportunities to generate revenue for our parks, which ultimately benefits all our children and grandchildren,” Pinero said. “I encourage everyone to take time this weekend to stop by the park and support all the activites.”

Admission to the tournament is free, however donations will be accepted at the gate, Stevens said.

All proceeds raised will go to the parks and recreation department’s budget.

The game begins at 9 a.m. and concessions will be available for purchase.

Stevens said the tournament will be volunteer-run and if anyone would like to volunteer or sponsor a team they can contact him at 601-916-9016 or by email at hstevens@picayune.ms.us.