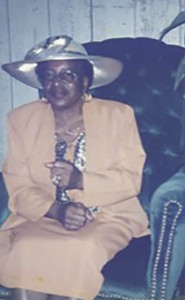 Dorothy Jean Adams was born August 17, 1938 to the late Mr. Bonnie Hayes Adams and Mrs. Fannie Mickel Adams of Bassfiel, Miss. On August 6, 2014 at 3 a.m. the death angel came down and gave her, her final resting place. She passed away at Forest General Hospital, in Hattiesburg after 75 years of living.

Early life Sister Dorothy Jean Adams joined the Holly Spring C.M.E. Church in Bassfield Ms. Sister Dorothy Jean Adams was joined in Holy Matrimony on January 5, 1956 to Mr. Alex Luke Holloway Jr., to this union (5) children were born. Later in life they moved to McNeil where she joined the Little Zion Travelers Baptist Church where she accepted Christ under the leadership of Rev A.W. Parker. She was employed with the P.R.C. School District for many years. After retiring Sister Holloway took up babysitting her grandchildren and a few others in the neighborhood until her health began to fail her.

She was a devoted wife, mother, and grandmother. She was very active in the Church. She was loved by many and touched many lives. Sister Dorothy was preceded in death by her parents Mr. Bonnie Hayes Adams and Mrs. Fannie Mickel Adams, her husband of 58 years Rev, Alex Luke Holloway Jr. her stepdaughter Jackie Hawkins (10) ten brother in-laws (10) ten sister in-laws.

Funeral services for Sister Dorothy Jean Adams Holloway will be Saturday August 9th, 2014 at the New Hebron Baptist Church Carriere. Pastor Kenneth Martin Thomas Jr. will officiate at the service. Visitation will be from 12 Noon – 1 p.m., funeral service beginning at 1 p.m. Interment will be at the McNeil Cemetery. The repast will be held at the home of Sister Dorothy Jean Adams Holloway.