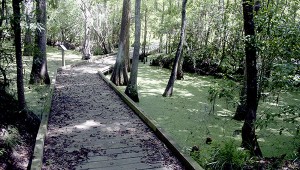 The south is well known is for its swampland.

The popularity of television shows such as “Swamp People” and “Duck Dynasty” demonstrate the appeal of the south’s murky waters.

O’Berry is also a frequent visitor to the Bogue Chitto.

According to the website, the Bogue Chitto is a bottomland hardwood forest consisting of a number of sloughs and bayous.

There are four streams designated as scenic rivers by the Scenic River Act, O’Berry said.

There are many recreational activities for the public’s use.

According to the website, there is hunting, fishing, wildlife observation, hiking, camping, birding photography and canoeing. All hunters must have a Refuge Hunting permit in their possession.

The permits can be obtained at the Lacombe office, O’Berry said.

O’Berry said the first fishing tournament was held in June.

According to the website, the event will occur each year in celebration of National Fishing and Boating week.

A new boardwalk and fishing pier was constructed around the back side of the fishing pond and opened in June, the website states. That area does not allow camping or hunting.

O’Berry said one of her favorite activities is visiting the Bogue Chitto pond in the afternoons.

“There are egrets, herons and ibises that fly in every evening,” O’Berry said. “

According to the website, there are a number of endangered species inhabiting the refuge, including the ringed-sawback turtle, American alligator, gopher tortoise, inflated heel-splitter mussel, Gulf sturgeon and swallow-tailed kite.

O’Berry said the swallow-tailed kites travel from Brazil to the refuge to raise their young and the ringed back turtle are indigenous to the area.

“It’s a nice little secret that not many know about,” O’Berry said.

According to the website, the east side of the Bogue Chitto can be accessed from the Dumas Wise Road near the Walkiah Bluff Water Park.

Contact the Lacombe office of the U.S. Fish and Wildlife Service at 985-882-2000 or by email at southeastlouisianarefuges@fws.gov.