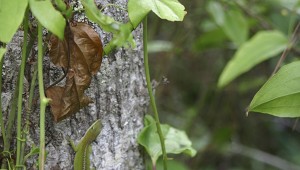 GROCERIES: An anole lizard scales a tree, surrounded by Smilax leaves, commonly called greenbrier. This vine has a high wildlife value and its young shoots can also be steamed and eaten like asparagus.
Photo by Pat Drackett

Sometimes during our Arboretum field walks, when a new plant is encountered and being discussed, a participant will pose the question, “Can you eat it?” Many plants that we only consider “weeds” can be incorporated into salads or cooked and consumed, often being quite nutritious and containing high amounts of vitamins and minerals.

Judging from the questions we’ve had from program participants and visitors, “foraging” for wild foods appears to be an increasing trend. Our annual lecture series in the spring of 2013 featured Dr. Charles Allen, co-author of The Edible Plants of the Gulf South, who drew a large crowd of persons interested in this subject.

Consider the challenging life that faced early settlers, when possessing the knowledge of plants that could provide food or nutrients could be of vital importance to a family’s survival during lean times. Today, searching out these same plants that lie in wait to be discovered, appreciated, and devoured, can be an entertaining quest for those who enjoy the process of learning about them, and continually seek to add to their knowledge of “useful” plants.

Several visitors have reported that the Peterson Field Guide to Edible Wild Plants is their favorite guide to edible plant material. But keep in mind that it can be helpful to consult more than one reference on the subject.

I admire those with the interest and patience to pursue their passion to become “foragers”. Personally, I’d rather have a good friend who was interested in the subject and would invite me over regularly for well-seasoned and pre-tested meals, than to have to find the ingredients on my own. My exploration of edible plants is limited to those very obvious fruits and berries that beckon for immediate field consumption, such as tasty muscadines, blueberries, blackberries and dewberries, or those that need a little sugar and cooking, like mayhaws, crabapples, and persimmons.

One point to consider is the need for a positive identification before consuming a plant collected in the wild. A case in point is the story told by Dr. Wayne Morris, the Troy University biology professor who led our recent field walk to the Arboretum’s Hillside Bog natural area.

His cautionary tale involved a case of mistaken identity in his early years when he collected a specimen that he believed to be a water hickory (Carya aquatica), but realized too late that he had just snipped off a branch of poison sumac (Toxicodendron vernix). Even highly knowledgeable individuals can make an error now and then, so practice caution and don’t ingest a plant without knowing its identity.

Dr. Morris recently sent us a list of the plants we encountered and discussed during his Hillside Bog field walk. One of these plants wasCirsium lecontei, a rare species of thistle. He said that some people, especially in Europe, go to the trouble to removing the spiny projections from thistle leaves and then eat the leaves in salads. Commercial lettuce and endive are in the same plant family.

On our walk, we saw both Gaylussacia dumosa and Gaylussacia mosieri, two shrubs that are often called huckleberries, and are relatives of blueberries and cranberries. Both are clonal shrubs with underground rhizomes, with the ability to resprout following fast-moving, low intensity fires historically caused by lightning strikes, and today, by prescribed burning.

Prunus serotina, black cherry, has a noticeable horizontal “ringed” appearance on bark and is the source of handsome cherry furniture handed down from generation to generation in Deep South families.

Although the fruit is consumed by many birds and other wildlife, and used traditionally to make pies, jams, jellies, and wine, its poisonous compounds (cyanide-like glycosides) become concentrated in the leaves, seeds, and bark, especially during the fall, and can poison and cause the death of livestock animals.

Persea palustris, swampbay, is a plant related to redbay, as well as the commercial bay from Europe, cinnamon, and sassafras. It has very aromatic leaves that can be used to flavor foods such as spaghetti sauce or stews. Sassafras albidum has been used to flavor Cajun gumbo and stews, and is related to swampbay. Rhus copallinum, winged sumac, has fruit that is eaten by many wildlife species. Juice from the fruits can be used to prepare a lemonade-like beverage.

Smilax laurifolia, commonly known as laurel brier or greenbrier, has a high wildlife value, and white-tailed deer will browse the young shoots, which can also be steamed and eaten by humans like asparagus. Rabbits eat the leaves, and beavers sometimes eat the underground tubers. Bobwhite quail, wild turkey, and over 40 species of songbirds eat the fruits.

We appreciate Dr. Morris providing the above information on these plants at Hillside Bog. If you would like a detailed copy of his full plant list for the field trip, call the office and we would be happy to send you one.

Want to learn more about edible plants? Attend a fun and informative program at the Crosby Arboretum on Saturday, August 23, from 1:00 to 2:00 p.m. with Darla Pastorek, who will discuss plants that are tasty to both you, and to our local wildlife.

She will talk about reveal her favorite wild and cultivated edible plants, and how you can grow them in your garden.

Mark your calendar to take a summer tour of the Arboretum grounds with Director Pat Drackett on Saturday, August 30 from 10:00 to 11:00 a.m. to discover what is currently blooming in our south savanna and pitcher plant bog.

FOR FURTHER EXPLORATION: Search the Internet for books and other resources. Search for the keywords, “eat the weeds”.