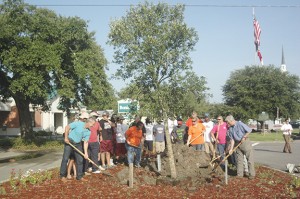 The first of 20 live oaks were planted along Goodyear Boulevard at 8 a.m. on July 10, 2014, as part of the city’s revitalization efforts in the area.

Prior to 1969 and the devastation of Hurricane Camille, Goodyear Boulevard was once a canopy of majestic oak trees whose beauty grew to hold significant meaning to Picayune residents.

For the kids of the ‘60s, the term “The Boulevard” often serves as a catalyst in conjuring up a world of meaningful memories associated with those beautiful oaks.

According to, City Manager, Jim Luke “the trees embody the charm and lifestyle of the antebellum south” and while many have been around since Picayune was founded in 1904, others are estimated to be over 200 years old.

In recent years, Hurricane Katrina and Isaac have finished what Camille started so long ago by wreaking havoc on the old trees.

Public Works Director, Eric Morris says the city hired an independent arborist in 2013 to access the health of the trees. The assessment was brought on due to an incident in 2011 involving vehicle damage and a fatality from a broken limb, which occurred during Hurricane Isaac in August 2012.

During the assessment, it was discovered that 19 trees were compromised to the extent of removal. Their stumps were ground down to 6 inches below the dirt surface and then dressed.

The removal of these trees might have stood as the end of an era. However, the city has recognized both the significance and beauty of the oaks.

Morris explains it was brought to the city’s attention by Luke, during his historic research, that the original intent behind Goodyear Boulevard, at it’s inception, was to have a sort of “live Oak thoroughfare” from one end to the other. This was taken into consideration when the city decided to implement the project.

Picayune was one of 20 cities awarded the Mississippi Department of Transportation Urban Youth Grant, which has allowed them to hire 12 youth workers, currently enrolled in high school or college, to complete the project.

The 2014 Urban Youth Corps Program participants have performed landscaping, beautification work, vegetation cleanup, and have even had the opportunity to learn firsthand about city government. However, planting the oak trees has been the largest project that the crew has taken on this summer.

Grants Administrator, Christy Goss says, “Every project we start is meant to leave a footprint. We’re trying to make this a better place for future generations… like the greenspace park, new lighting and parking, or the litter initiatives. Those are things that are good for Picayune, both now and in the future. We want to make improvements that will last.”

Based on several factors, including the city’s budget for the project, Fulgham’s Inc. of Tupelo, the tree preservation service in charge of fertilizing Picayune’s mature oaks, advised that trees with a 3-inch trunk and 45 gallon base be purchased.

After conducting research on nurseries with the best stock for the best price, Morris personally visited CJ’s Nursery in Folsom, La. and hand selected the live oaks. As part of the agreement, Fulgham’s Inc. will fertilize each of the new trees for their first year free-of-charge.

Woody Spiers, former Mayor of Picayune, is responsible for the many beautiful trees planted along the railroad tracks in 1993. Spiers says, “I’m glad to see them making the improvements. Live oaks are a wonderful choice and will be much better than the water oaks or pin oaks planted in the past. These trees will still be here in 500 years if they’re taken care of properly.”