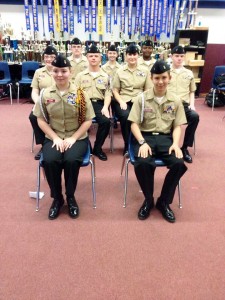 For the second year in a row, Picayune Memorial High School’s Naval Junior Reserve Officers Training Corps was named a distinguished unit. This year, for the first time since the unit’s inception 20 years ago, the Maroon Tide NJROTC earned the coveted title of academic honors.

Senior Naval Science Instructor, LCDR Steve Hardin, says, “This is a huge accomplishment for our cadets… and a great example of academic excellence in the Picayune School District.”

Being named a distinguished unit with academic honors is a major achievement and means, among other things, that Hardin will be able to make three nominations to the Naval Academy, West Point Military Academy and the Air Force Academy from next year’s senior class. Between all three academies, only 20 spots are reserved for JROTC students.

Being part of a distinguished unit with academic honors can aid students in the selection process. Although they will still have to perform academically, a nomination from their school’s senior instructor can work to a student’s advantage, and hopefully help them get one of the coveted slots.

NJROTC is a Federal program used in high schools across the country and sponsored by the United States Armed Forces. It is comprised of 11 different areas with 616 units and more than 89,000 cadets.

Picayune’s NJROTC is part of Area 8, which includes schools from Arkansas, Alabama, Louisiana, Mississippi and the Florida panhandle. Of the 49 schools in Area 8, Picayune Memorial High School NJROTC is currently ranked 5th. Only 15 of those schools were named distinguished unit and only 10 of those earned academic honors.

Hardin clarifies that in addition to holding a high area ranking, Picayune’s unit is also number 1 in the state of Mississippi.

These achievements illustrate the hard work of PMHS’s instructors, LCDR Steve Hardin and Chief Mark Thorman, who are assigned to administer and operate the NJROTC program. However, LCDR Hardin credits the students, booster club, teachers, school administration and parents for the unit’s outstanding performance.

“We get a lot of support from parents and the school, but this award is a culmination of hard work and dedication from each and every cadet in the unit,” Hardin said.

Area 8’s manager can annually recognize up to 30 percent of host schools that meet specified criteria of excellence contained in the unit’s end of year report. Then the Commander of Naval Services Training Command, who oversees all units nationwide, gives ultimate approval of the award. Only 10 percent of all the NJROTCs in the nation receive the academic honors distinction.

“We have a healthy academic program that encourages our cadets to excel, graduate and continue their post-secondary education.” Hardin said.

Receipt of this prestigious award is additionally based on contractual compliance between the U.S. Navy and each unit’s host school in the categories of academics/professional development, citizenship, unit participation, field trips, community service, participation in the national academic competition, participation in regional drill, field, air rifle, and academic meets.

NJROTC focuses on preparing students to become better citizens by teaching self-discipline and self-confidence through an array of curriculum.

According to njrotc.navy.mil, curriculum emphasis is on “citizenship and leadership development, as well as maritime heritage, the significance of sea power, and naval topics such as the fundamentals of naval operations, seamanship, navigation and meteorology. Classroom instruction is augmented throughout the year by extra-curricular activities of community service, academic, athletic, drill and orienteering competitions, field meets, flights, visits to naval or other activities, marksmanship sports training, and physical fitness training.”

The leadership and cadets of the Maroon Tide NJROTC would like to extend their sincere appreciation to the Picayune School District, Picayune Memorial High School, American Legion Post 73, Veterans of Foreign Wars Post 3804 and the Friends of the National Rifle Association.  The success of the unit wouldn’t have been possible without their unprecedented support. The cadets are excited for the 2014-2015 school year as they continue to strive for excellence.