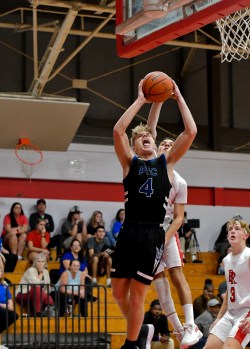 Konner Cazenave gets fouled and converts the layup during the Blue Devils 59-47 win over the Pearl River Rebels. 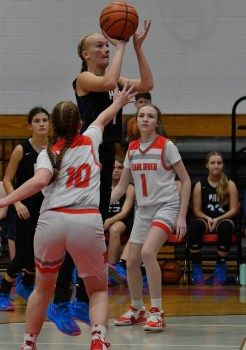 The Lady Blue (7-1) won 34-24. Emily Carroll led the team with 11 points. Nia English and Hannah Mitchell pitched in six and five points. This win puts the Lady Blue Devils back in winning status after losing to the Florence Eagles the previous week.

The Lady Blue Devils had a slow start to the game only scoring four points. The following quarters were another story after they found their rhythm.

When asked about the first quarter head Coach Cliff Bauer said, “I thought it was extremely slow, we just looked sluggish and had a hard time getting and rebounding the ball. It seemed like every aspect of the game was in slow motion.”

Bauer said what the cause of that was due to the Rebels defensive pressure. It ultimately led to turnovers and bad decision-making. PRC managed to figure out the pressure after the halftime break. They started making the extra assisting pass, and converting on layups that were missed during the beginning of the game. Once they got everything together, PRC ran away with a win.

A win is a win in Bauer’s book but he isn’t pleased by how they achieved it. He wants his upper-class players to step up and be more basketball smart in needed situations.

Next the Lady Blue Devils will host the Poplarville Lady Hornets on Nov. 29 at 6 p.m.

The Blue Devil boy’s basketball team (6-3) also had a sluggish start. They led by one point, 15-14 after one quarter of play and by a score of 27-21 at the halftime break. They would eventually get things together and close out the Rebels, 59-47. Donnie Ladner had 17 points, Konner Cazenave had 14 and Payton Cardona had 13.

“We weren’t really physical enough in the first half, kind of getting pushed around and bullied but becoming the aggressor changes things. I think coming out in the third quarter and really taking ownership, being the aggressor turned into being a more physical basketball team in the second half. I think that’s what propelled us.”

Next, the Blue Devils will also host the Poplarville Hornets on Nov. 29 at 7 p.m.