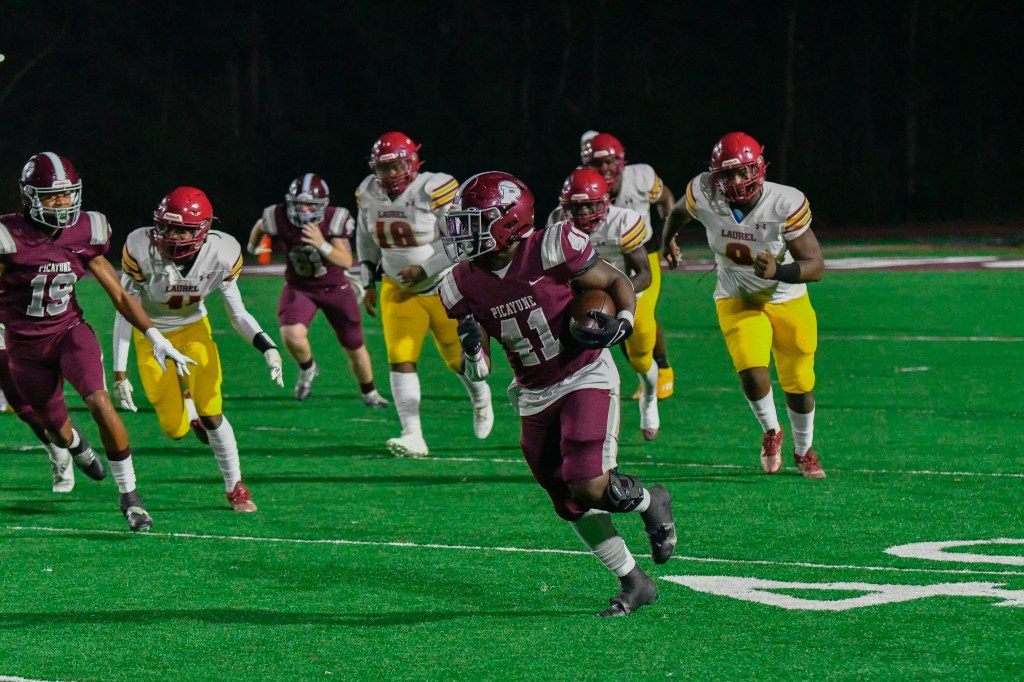 Darnell Smith carries the ball for a 47 yard touchdown, he carried for 107 yards off 11 carries during Picayune's first round win over Laurel.

The Picayune Maroon Tide will host he Gautier Gators this Friday in the 5A South State Championship game.

The stakes are higher than ever in this second meet up between these two teams. The winner of this game will punch their ticket to the 5A State championship. With a laugh of obviousness, Head Coach Cody Stogner said he expects Friday’s game to be similar as the previous meet up. Picayune’s overtime win to Gautier back on Nov. 3 was a roller coaster ride of emotions. Their success, clinched them a district championship and a No.1 seed in the playoffs. Don’t be surprised come Friday if the game comes down to the wire again.

“Its two football teams going to get after it, the saying goes ‘its hard to beat a good team twice,’ well this is a good team and its going to be a great game,” said Stogner.

What’s important for the Maroon Tide this week is maintaining their regular game week routine. Schools out and Thanksgiving week is here but also high school football is near its peak. Stogner said him and his staff make sure to keep this week as normal as possible. Fortunately, doing that was an easy task to ask from his players.

“This is the 14th week of the season, our guys are settled in to the routine, so they just got to continue their routine and stay the course,” said Stogner.

Another thing Stogner talked about was offense. Picayune had three costly turnovers last week and he took full responsibility and blame for it. Moving on, taking care of the ball is a key this week. He also tipped his hat to the defense and their ability to pick up the offense after their mistakes. And it works both ways.

“It’s a whole team effort, these guys are brothers out there and they got each others backs,” he said.

That brotherhood runs deep and its roots began back when they were kids. Senior fullback, and Peal River Community College commit, Darnell Smith said the majority of them have been playing football together since they were five years old.

In his for years as a Maroon Tide he said the football program never gives up.

“Whenever it comes down to it we never give up we always push through and try to make a change for the better.”

Picayune has faced many obstacles to get to where they are now. Preparation can get someone only so far, Smith said at that point you must have the mentality and grit the get through the rest. Part preparation, and part grit are what make Picayune breakers of any obstacle standing in their way of a State Championship.

For those who don’t know, come Friday Picayune will be facing a amazing passing team led by quarterback and Ole Miss baseball commit Kaden Irving. Picayune’s defense will have their hands full, Smith said Friday will be a defensive battle.

“We got to stop the quarterback from doing what he does and make him uncomfortable,” said Smith.

The way Smith contributes to this team is becoming the best blocker for the best rushers in the state, in Dante Dowdell, Chris Davis and his brother Darrel Smith. He said every game he expects himself to move people out of the way and create openings for his runners.

Witness Smith lead the way for his running back and the rest of the Maroon Tide players this Friday, Nov. 25 at 7 p.m. as they go head to head against the Gautier Gators. Winner punches a ticket the State Championships.