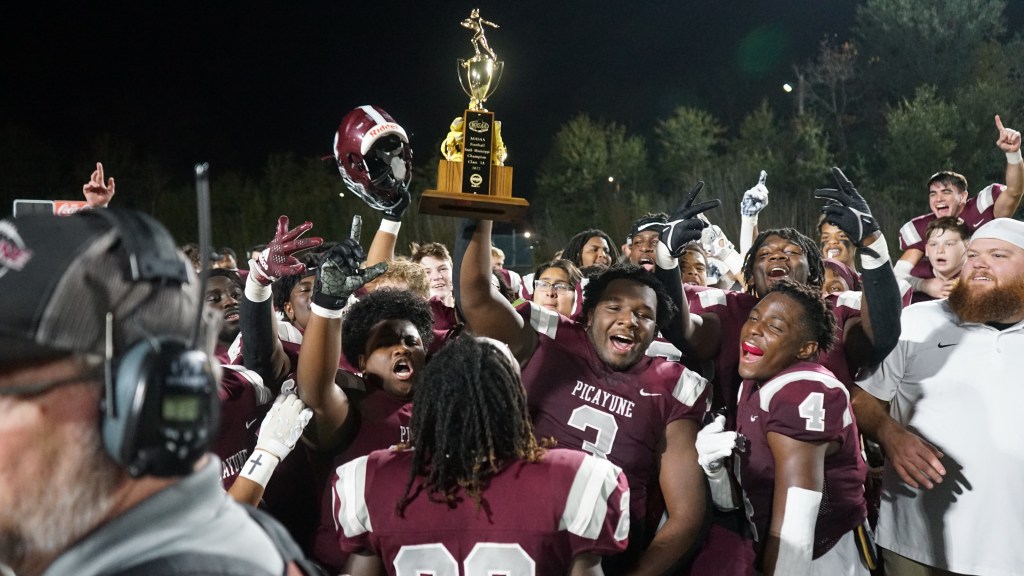 Holding the South State Championship trophy, Jabari McWilliams and the rest of the Picayune Maroon Tide team celebrate their 49-14 win over the Gautier Gators.

The Picayune Maroon Tide punched their ticked to Hattiesburg MS, after 49-12 South State championship win over the Gautier Gators. This will be the second time in two years Picayune makes a 5A State Championships appearance.

Before the 5A State Championship, Picayune had to take care of business at home first.

The Gators received the ball to start the game; they didn’t get anything done punting after just three plays. Picayune’s first drive almost concluded with a punt, but Chris Davis faked the kick and used his legs to pick up a first down. Four plays later Picayune set up shop at the Gators 15 yard line. Two plays later Dante Dowdell ran in a 10-yard touchdown. This put Picayune in front, 7-0 at the 4:35 marks.

The Gators offense answered with their own big play. Quarterback Kaden Irving connected with Aaron Phillips for a 68-yard touchdown pass. The Gators tried for two, but were stopped short by a gang of Maroon Tides defenders. Picayune held their lead at 7-6 with 2:58 remaining.

Picayune took their following drive into the second quarter. In 11 plays covering 80 yards, Picayune scored, increasing their lead 14-6. The drive was capped off by Darnell Smith and his 36-yard rush. Picayune scored again at the 5:37 mark making it 21-6. Dowdell capped off the six-play drive with a goal-line rush. Gautier answered by scoring off a deep touchdown pass by Irving. He also QB sneaked for a two point conversion leaving them behind 21-14 at the halftime break.

This is what Picayune Head Coach Cody Stogner had to say about their strategy coming out of the half.

“The game plan was simple, just stay on sides and hold on to the football. We thought we were the better team and thought we had them gassed there towards the end of the first half, we felt like we could sustain drives, three four yards a carry and we could ware them out. Eventually you saw what happened,” said Stogner.

There was only one touchdown scored in this quarter and it was by Dowdell for another goal-line rush.

The Gators were shut out again while Picayune scored three unanswered touchdowns. The first of three were by Dowdell, an 80 plus yard rush from him. Then it was Chris Davis’s turn, after an eight plays Davis capped off the drive with a 28-yard rushing. The final touchdown of the night occurred with 3:22 remaining. After five plays Dowdell stamped his spectacular night with a 32-yard touchdown rush.

He finished with five touchdowns off 274 yards. The Picayune defense had four interceptions each from Davis, Jamonta Waller, Jessiah Contee and Damarius Magee.

Stogner tipped his hat to the offensive line, saying they played phenomenal. They opened a lot of gaps for their runners, who would go on and have seven rushing touchdowns. The Maroon Tide defense also had a huge handprint in the nights win.

The Gators are a high level scoring team and for them to be held to 14 points just shows how good the Maroon Tide defense really is.

“Preparation by the coaching staff, but its them believing in the game plan and executing the game plan, that’s what it is, said Stogner. “It was amazing energy and amazing effort all night long, I’m so proud of the defensive side of the ball.”

Next, Picayune will play for the 5A State Championship, Friday Dec, 2 a Southern Mississippi University in Hattiesburg MS. They will play the West Point Green Waves.