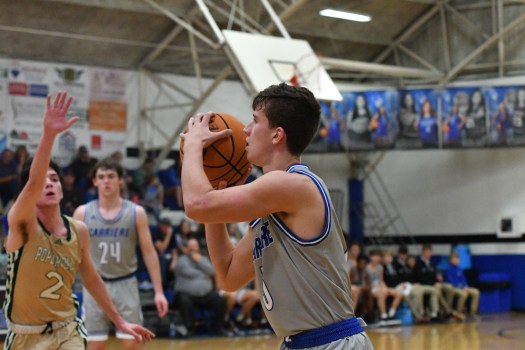 Treyton Mitchell lines up a three point shot, finishing with 18 points during the Blue Devils win Over the Poplarville Hornets 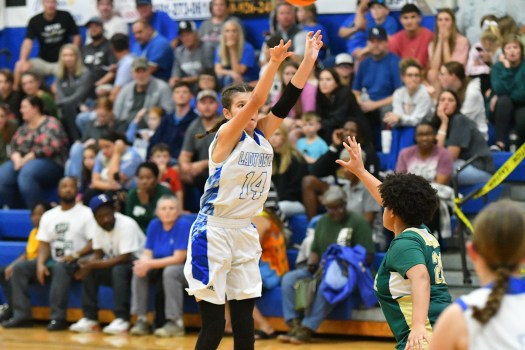 Emily Carrol shoots a three as she finished with 21 points during the Lady Blue Devils win over the Lady Poplarville Hornets.

On Tuesday night there was a county double header in Carrier MS where the Pearl River Central Blue Devils hosted the Poplarville Hornets.

Both teams tied 4-4 after one quarter. The second quarter featured a lot more points with several lead changes. Poplarville led for the first time at 7-4 after a Bester three pointer. There was another lead change after a gritty PRC sequence. Carroll shot two at the strike, made the first, missed the second but Hannah Mitchell rebounded the ball and kicked it out for a Carroll three-pointer. Less than four minutes the Lady Hornets reclaimed their lead and led as much as four points. Trailing 15-13 PRC’s English hit back-to-back three-pointers. This gave PRC a 19-17 lead; a single free throw put them up 20-17 at the half.

The Lady Hornets tried to see another lead but the Lady Blue Devils kept them at bay. When PRC led 22-21 at the five-minute mark, they scored 10 points over Poplarville’s two points. PRC’s Mitchell picked a steal for a layup, Poplarville’s Travis responded with a three, then English capped the quarter off with a last second layup. At that point PRC led 36-27.

The Lady Blue Devils stand at 9-1 this season. The Lady Hornets stands at 3-2.

The Blue Devils beat the Hornets 62-18. Treyton Mitchell had a team game high 18 points off four made threes and Donnie Ladner had 14 points.

The Blue Devils led 13-9 after one quarter. In the second quarter they out scored the Hornets 16-0. At the halftime break PRC led 27-9.

Poplarville ended their scoring drought after Jaden Bell’s made free throw. PRC’s scoring flow continued after Ladner hit his second three of the night. PRC ended the quarter on fire. They hit four consecutives threes to lead 51-15. In the final quarter, PRC out scored the Hornets, 9-3.

The Blue Devils stand at 7-3 this season. The Hornets stands at 0-5.