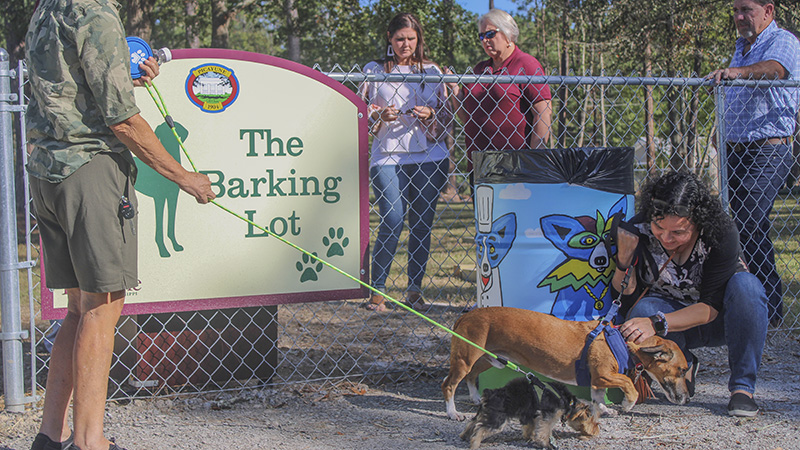 Dog owners gather outside of The Barking Lot in Picayune in preparation for the grand opening of the city’s first dog park across from Mildred Mitchell Park. A second dog park is slated for construction along Goodyear Boulevard next year.

Picayune’s first dog park, The Barking Lot, officially opened on Monday during a grand opening ceremony. The new park focused on the needs of canines is located at the corner of Highway 43 North and Daniels Road, adjacent to Mildred Mitchell Park.

The city was awarded a $7,100 grant from Home Depot to help with the construction of the park. Home Depot also supplied the city with fencing. West Side Upper Elementary teacher Susan Barker Spiers and her students in the gifted classes from the grades of 4th, 5th, and 6th donated a painted trash can, made from a 55 gallon drum featuring their rendition of New Orelans native George Rodrique’s Blue Dog. The 4-by-4 timbers that are around each interactive amenity were donated by Philips Building Supply. The water faucet and leashing and unleashing yard was donated by Southern Pipe. There is an old red fire hydrant for canine purposes as well. There are two bridges for dogs to cross, a large black pipe dogs can run through and an A frame run up and down bridge.

“It’s been a really cool project all along the way,” said city of Picayune Public Works Director Eric Morris.

The city owned park also features a number of items Morris and his crew repurposed to create amenities for the dogs use.

Morris said finishing the park was overdue and will be of great benefit to the community. The park’s design was based off a combination of other dog parks and ideas collected by Mayor Jim Luke, Morris and his staff.

“Every division of the public works department had a part to play in this park,” he said.

A video demonstration of how to use the amenities in the new dog park is available on the Pearl River County SPCA’s Facebook page.

Another dog park slated for construction along Goodyear Boulevard where Pat Blades Memorial Park is located is also planned. Luke said the next dog park will be built sometime next year. The plan is to divide the two parks.