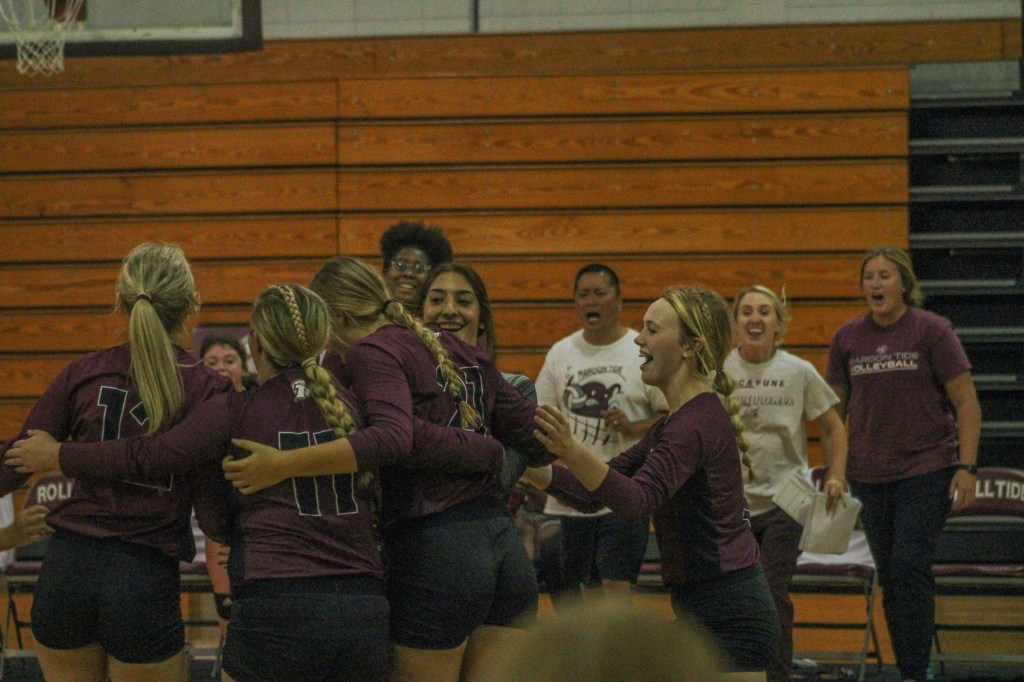 Picayune’s Lady Maroon Tide volleyball team brought out their best against the Poplarville Lady Hornets in a 3-0 sweep on Monday night. The win gives Picayune a two game streak sitting at 7-14 on the season. Poplarville drops to 11-5 on the season.

“We looked a whole lot better (compared to the season opener) so that makes me feel better, makes me feel like we’ve gotten better. We looked a lot more comfortable tonight… it was a good win,” said Dickens.

Poplarville looks to put this game behind them as soon as they can.

“We just couldn’t get it to work tonight. We just need to come back tomorrow and forget about today and keep working to get ready for Saturday,” Poplarville’s Head Coach Amanda Ladner said.

Down 0-9, Picayune was down in early in the first set. Poplarville’s Caroline Phase opened the night with a kill, Sarah Bolin served an ace and Bolin assisted Lendy Crider to gain their lead.

When asked about her thought process when the team was down 0-9, Dickens said, “I was thinking to myself, ‘we’ll see what we’re made of.’”

Finishing games and playing from behind has been a struggle for the Lady Maroon Tide. Dickens has coached her team that they can’t shrink a large deficit all at once. They’ll have to learn to scratch away one point at a time and view each rally as a new game.

Later, that 0-9 deficit turned into a 10-10 tie. From there both teams exchanged rallies, kills and aces. The game tied again at 20-20 after Poplarville’s Carli McCurdy’s kill. Picayune took over at this point, Annaleigh Robbins spiked a kill, Reese Sorrells then served an ace and three Lady Hornets errors gave Picayune the first set.

Picayune took a commanding 10-1 lead Amaiyah Marks picked up four aces and Sorrells contributed two kills. Poplarville did their best to narrow the deficit but Picayune maintained a lead. The score never reached less than three points. With Picayune leading 21-16, Robbins converted back-to-back kills. Poplarville was then called on a double hit then Robbins ended the set with a solo block.

The Lady Hornets led early, taking a 5-2 lead with plays behind Lily Tynes kill and a Bolins dink. Picayune stayed near by, eventually tying the game at 8-8. From there they took control, expanding their lead to 20-12. Marks picked up back-to-back aces, Sorrells served her own ace and spiked a kill to lead 24-13. Then a final Picayune kill clinched the win.

Senior Marks led the way for the Lady Maroon Tide the last two wins, accounting for the majority of Picayune’s points. She’s difficult for opposing teams to handle when she serves, is experienced at spiking when she is near the net and an intelligent player who can place the ball in any open spot. Last week in their senior night win against Pearl River Central, Marks served 12 aces. In Monday’s game she had 8 aces with two kills.

“She’s really stepped up, I would say in the past could weeks she’s really shined. Amiyah’s severing has been phenomenal but that’s something she really works on in practice and she really focuses on that because she knows that she can be a dominate server,” said Dickens.

Dickens has also witnessed Marks bloom into a great reader of the court and finding holes in the opposing offense.

“That’s what you’d expect from a senior, she’s really playing her role very well and I’m very proud of her,” said Dickens.

Other Picayune stats: Kaigyn Kulas had 8 assists, Sorrells had 7 and Robbins had 7 kills.