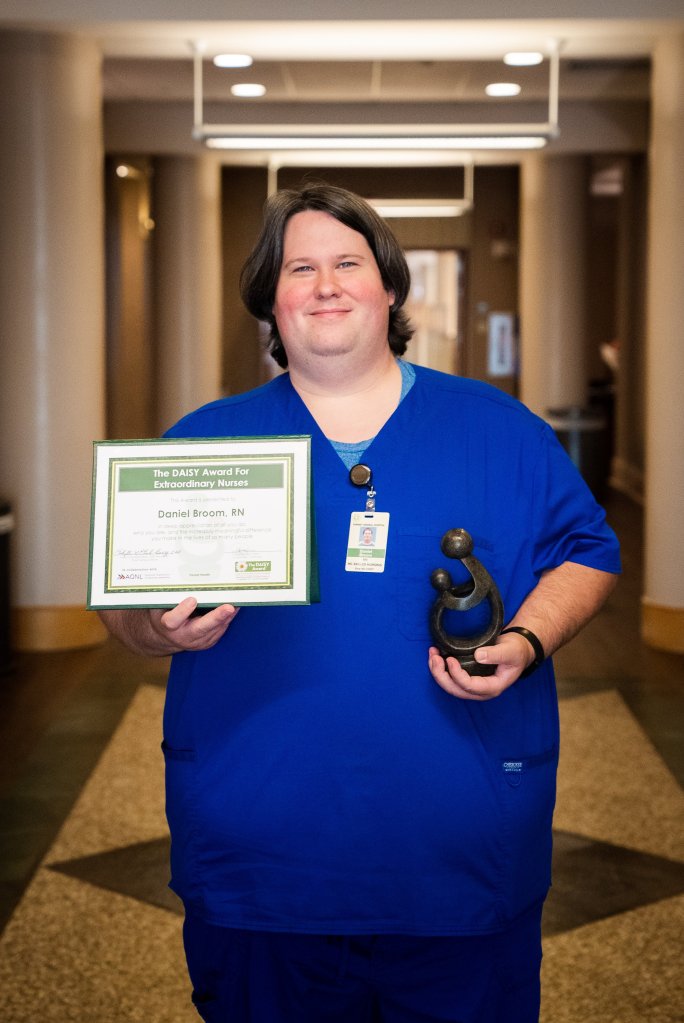 HATTIESBURG, Miss. – (September 29, 2022) Daniel Broom, RN, a Home Care nurse for Forrest General Hospital, has been named the August recipient of the DAISY Award. The award, which is presented monthly to a deserving nurse or nurses, exemplifies clinical expertise and compassionate care and is recognized as a role model in the nursing community.-

In addition to his education and skillset, Broom recently went above and beyond during a weekend call to teach IV therapy to a patient. Prior to his visit, the patient called and explained that it was very hot in the home because the air conditioning had broken. Broom explained he would continue to make the visit. Upon arriving at the home, Broom discovered that the air conditioning unit was frozen, and the batteries to the unit’s remote were missing. Broom opened the unit so it could thaw and went to purchase new batteries for the remote. Before he left, the patient’s air conditioner had been restored and was in great working order.

“Daniel went above and beyond to assist the patient I a time of need,” said his nominator. “Due to his diligence in working on the unit, the patient was able to be comfortable when temperatures were soaring into the high 90s.”

Broom, a resident of Sumrall, received his degree from Jones College. His passion for nursing and healthcare is a direct result of both his mother and his sister being nurses. “I wanted to follow in their footsteps,” said Broom, who has worked at Forrest General for about three years.

“Nurses, like Daniel and others, who have been nominated for and honored with the DAISY Award during the past year, are an integral part of what makes Forrest General such a caring and compassionate place for your healthcare needs,” said Phyllis Chambers-Berry, Forrest Health vice president. “I am so proud of Daniel and how hard he works to make our patients feel appreciated and cared for in such a warm manner.”

The DAISY Foundation was established in 1999 in California by the family of J. Patrick Barnes, who died at the age of 33 from complications of an auto-immune disease. During his eight-week hospital stay, his family was impressed by the care and compassion his nurses provided, not only to him but to everyone in the family.

They created the DAISY Award in his memory to recognize those nurses who make a big difference in the lives of so many people.

Forrest General Hospital is proud to be a DAISY Award partner and recognizes one of its nurses with this special honor every month. Nurses are nominated by patients and family members, as well as other healthcare professionals. The winner is then selected by a board of healthcare workers. Each DAISY Award Honoree is recognized at a public ceremony in her/his unit and receives a certificate, a DAISY Award pin, and a hand-carved stone sculpture entitled, “A Healer’s Touch,” handcrafted by a tribe in Zimbabwe.

To nominate a nurse for a DAISY Award, visit forrestgeneral.com/daisyaward.