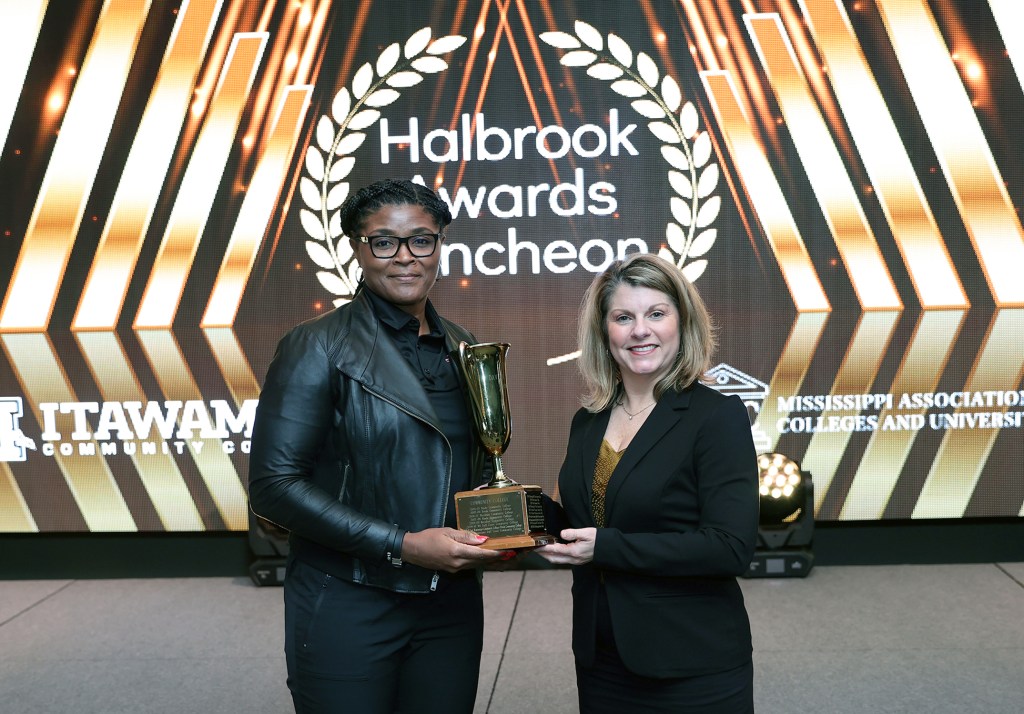 TUPELO — For the second time in four years, East Mississippi Community College has earned the David M. Halbrook Award for having a perfect 100 percent graduation rate among the school’s sophomore student-athletes during the 2021-22 academic year. The prestigious award was presented at the Mississippi Association of Colleges and Universities (MAC) business meeting, held this week in Tupelo.

Having previously garnered the coveted Halbrook Award during the 2018-19 academic year, this year’s EMCC contingent graduated all 62 of its second-year student-athletes in addition to having three completers during the 2021-22 academic year. The College’s 65 certified student-athletes consisted of 30 players from the Lions’ 2021 MACCC North Division championship football squad, 19 from baseball’s NJCAA Region 23 Tournament club, six from softball, and five each from women’s basketball and men’s basketball’s MACCC Tournament championship team. Rodeo was not included among the graduation statistics because the sport is not affiliated with the Mississippi Association of Community Colleges Conference (MACCC).

“Receiving the Halbrook Award is a wonderful recognition of the hard work and efforts of EMCC’s student-athletes,” EMCC President Dr. Scott Alsobrooks said. “This recognition represents the dedicated efforts of EMCC’s faculty, counselors and staff that work so diligently to ensure student success. We continue to take great pride in performing at a high level both in the classroom and during athletic competition. A special thanks also goes out to the Halbrook family for sanctioning these awards for community college students.”

Along with EMCC earning this year’s David M. Halbrook Trophy Award for having the highest percentage of graduating student-athletes in the Community and Junior College Division, the University of Mississippi collected both the men’s and women’s awards for the Public University Division. Mississippi College grabbed top honors in the Independent College and University Division.

Individually for EMCC, Kaitlynn Stroud and Wesley Sides were the school’s respective female and male recipients of the 2021-22 David M. Halbrook Certificate for Academic Achievement among student-athletes in the community college division. From Enterprise, Stroud posted a 4.00 cumulative grade point average in nursing as a two-year softball player for the Lions. Sides, from Southaven, posted team-leading numbers with 13 home runs, 40 RBIs to go along with his club-best .346 batting average to pace the 28-19 Lions to their first NJCAA Region 23 Baseball Tournament appearance since 2015 and a third-place finish in the MACCC regular-season standings with a 20-8 conference record this past year. The DeSoto Central High School product is currently continuing his collegiate baseball career at Mississippi College.