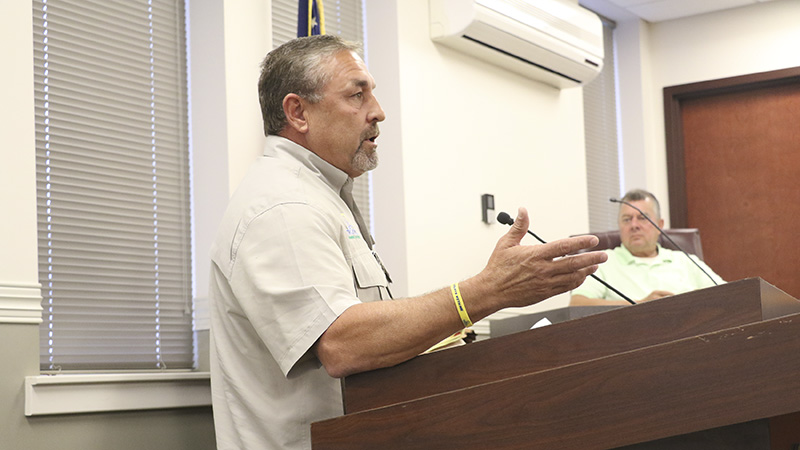 Coastal Environmental Services CEO Gus Bordelon addresses the City Council during Tuesday’s meeting to state why the city and his company need to continue negotiations on a waste collection contract due to the rising cost to do business. Photo by Jeremy Pittari

Rising costs to do business forced the City Council in Picayune to enter into a new set of negotiations concerning waste collection for city residents.

Nicholas K. Thompson with Copeland, Cook Taylor and Bush, who said he was retained by the city to assist in the new negations, said the city and Coastal Environmental Services entered into a contract on Aug. 16 of this year at a rate of $18.84 per unit for a total of 4,250 units.

When Coastal Environmental Services sent the signed contract back, some changes had been made, such as removing the 5 percent cap for annual cost increases, and adding a fuel surcharge when diesel rises above $3.25 per gallon.

Thompson’s issues with the new contract were centered on the fact that the city can’t remove items in a contract where a bid has been approved by the Council. The addition of the fuel surcharge could mean additional expenses to the city in the tens of thousands of dollars per month, Thompson estimated.

Currently, Coastal Environmental Services has been providing waste collection services for the past month without being paid due to the discrepancy.

To rectify the situation, Thompson suggested revising the contract to add the 5 percent rate cap and revise the fuel surcharge so it does not kick in until the price of diesel rises above $5.25 per gallon.

Gus Bordelon, CEO of Coastal Environmental Services, said the change was made to the contract due to the rising cost of fuel and the current difficulty in finding new employees. Additionally, a change to a fully automated pick up system is on the way. Bordelon said that change will negate the need for people to ride on the back of the truck, and instead utilize an automated arm that will empty trash cans into the truck. That change is slated to take place in November.

Bordelon added that the national average in contract rate increase caps is just above 8 percent. He asked the Council to consider increase the rate cap to the government approved 8.2 percent, or a fuel surcharge. Either way, any increases will not take place until September of 2023, and by then the rate may be lower than it is this year, Bordelon said.

He added that his company has continued to provide waste collection services in good faith even though the current negotiations have prevented him from collecting fees from the city for the past month.

Bordelon said his company has worked out similar contracts with cities in St. Tammany Parish and for service in Hancock County.

He said he will continue to charge the already agreed upon rate of $18.84 per unit until bids for the service come up again before Sept. 2023.

After discussion of the matter, the Council approved a motion to continue negotiations with Bordelon for a reasonable amount of time. The Council also approved paying the company for services provided during the previous month.