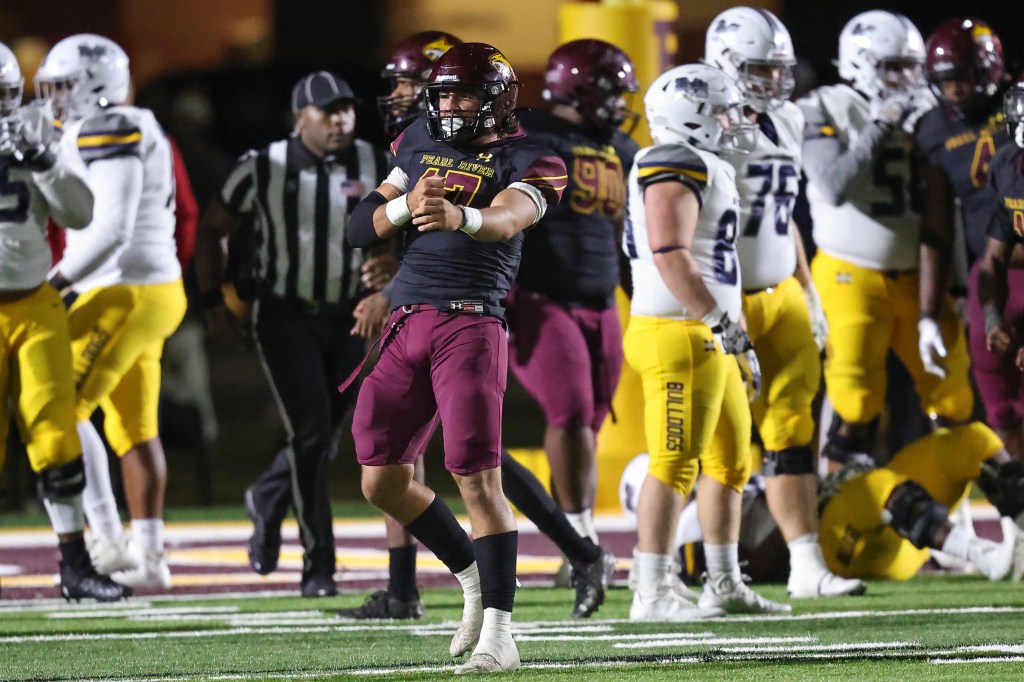 POPLARVILLE, Miss. — The 100th all-time matchup between the Pearl River football team and Gulf Coast proved to be a game for the ages. Highlighted by a massive fourth quarter defensive stand, the Wildcats took down the Bulldogs 24-14 Thursday night inside Dobie Holden Stadium.

The victory moves the all-time series between the teams to 56-43-1 in favor of Pearl River. It was also PRCC’s first victory over MGCCC since 2017.

“This has been an enduring journey, but these kids are the reason that this happened,” Pearl River coach Seth Smith said. “Thank God that I get to coach them. We have the best coaches that you could work with, and we’ve got the best kids.

“If you were looking at a big puzzle, I’d just be a little piece of it. Our coaches and players make this stuff happen. You got to see it tonight. We were blessed to pull it out.”

Smith talked about the differences between this week and last week.

“We were 4-for-14 (on third downs) last week. That’s why we lost the game,” he said. “When you have a defense like this and you convert on offense, you have a shot in every game. The difference this week opposed to last was the third down conversions. We were able to eat clock and play great defense.

“It was just the ultimate team win tonight.”

Pearl River (3-2 overall; 1-1 MACCC South) got on the scoreboard first with 7:34 remaining in the first quarter of the night. After the Wildcat drive stalled out, Michael Owens (Hattiesburg; Oak Grove) trotted onto the field and nailed a 32-yard field goal to make the score 3-0.

On the next Gulf Coast (2-3; 1-1) drive, the Bulldogs made their way into Wildcat territory and were sitting on the 33-yard line. On the next play, the Gulf Coast quarterback dropped back and saw a wide-open receiver but before he could let go of the pass, he lost handle of it. Bryan Whitehead II (Bartlett, Tenn.) rushed in, picked up the loose ball and dashed 67 yards down the field for a touchdown. The defensive touchdown was Whitehead II’s second of the season and extended the lead out to 10-0.

“The play that Whitehead made swung the momentum early,” Smith said. “We had just fumbled and then he makes that play. He is an SEC football player.”

Elijah Jenkins (Picayune) sent the Wildcats into the second quarter in a big way. The edge rusher flew off the line of scrimmage, tracked down the quarterback and sacked him for a 13-yard loss.

A defensive battle took place over most of the second quarter until the Bulldogs used a nine-play, 76-yard drive to get into the endzone with 2:25 remaining in the half. The touchdown pass came from four yards out and made the score 10-7 just before the half.

Gulf Coast took its first and only lead of the night right at the beginning of the third quarter, going 96 yards on eight plays for a 14-10 lead.

PRCC turned in one of its most impressive drives of the season on the ensuing possession, running 16 plays before capping it off with a quarterback sneak touchdown for Lawson Pratt (Tuscaloosa, Ala.; American Christian Academy). The touchdown was his fifth rushing touchdown of the year and gave the Wildcats the lead once again, 17-14.

The PRCC defense forced a quick three-and-out to begin the fourth quarter and capitalized on the offensive side of the ball.

Nick Milsap (Raleigh; Oak Grove) began the drive with a 15-yard run and Pratt followed it up with a 3-yard rush. Pratt connected with Kevin Wilcox (Carriere; Pearl River Central) on a tight end screen for a 7-yard reception. After a few more plays pushed the ball down to the MGCCC 4-yard line, Milsap punched it in to extend the lead to 24-14.

Just like the Wildcat defensive unit has done all season, they showed up and showed out on what proved to be the final Gulf Coast drive of the night. Despite the Bulldogs quickly moving the ball down to the Pearl River 1-yard line, the Wildcats didn’t fold under the pressure. The first rush attempt was stuffed by Jenkins and Marquez Tatum (Mobile, Ala.; LeFlore). On the next try, Eli Hackbarth (Birmingham, Ala.; Oak Mountain) and Michael Montgomery (Vicksburg; Oak Mountain) met the running back in the middle for a 1-yard loss. The next play saw Montgomery blow it up as well, forcing the Bulldogs into a fourth down try. The Bulldogs again tried to punch it in from a few yards out, but the Wildcat defense swarmed the rush attempt and turned in a remarkable defensive stand.

The Wildcats were forced to punt on their offensive possession, but Corblin McGinn’s (D’Iberville) punt was muffed by the MGCCC return man and PRCC jumped on the ball. Three quick kneel downs from Pratt gave Pearl River its first win over Gulf Coast since 2017.

Milsap finished with 80 yards and a touchdown on 18 carries. Pratt carried the ball 21 times for 54 yards and a score.

McGinn was a difference maker with his punts, averaging 41.8 yards across four attempts.

Pearl River hits the road next Saturday for a matchup with rival Jones College. The game will serve as the Bobcats’ homecoming and kickoff is set for 3 p.m.

Pearl River livestreams all games for free at PRCCMedia.com/gold. Fans who have Roku, Amazon Fire, or Apple TV devices can also watch the Wildcat broadcasts by downloading the “Pearl River CC” channel from their app. stores.

Games will also be available over the air in Pearl River County by tuning into 1320 AM and 106.9 FM.

The radio broadcast is also available at WRJWRadio.com and by downloading the WRJW app.