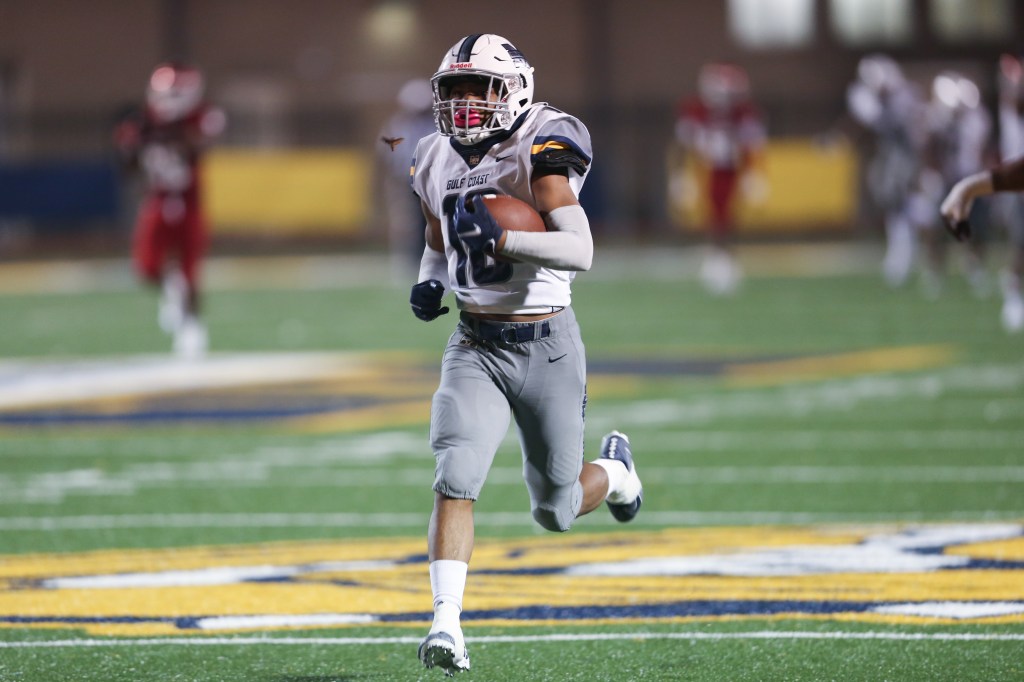 PERKINSTON —  Fans of offensive football loved what happened at A.L. May Memorial Stadium on Thursday night, but for Mississippi Gulf Coast there was the feeling of what might have been.

The Bulldog saw a 24-point third-quarter lead evaporate in a 48-45 loss to No. 8 East Mississippi.

“I’ve never been a part of a game like that,” Gulf Coast coach Jack Wright said. “If you’re a spectator, it’s a great game, but for us, it’s tough to be on the short end of that one.”

Keymari Odum (So., Haines City Fla./Ridge) had six catches for 201 yards and two touchdowns which covered 68 and 80 yards.

Cam Thomas (So., Picayune/Picayune) broke the school record with a 99-yard touchdown run to open the scoring, finishing with 14 carries for 131 yards. Xavier Evans (So., Laurel/Laurel) ran for 109 yards and a touchdown.

Thomas’ long touchdown run came with just 47 seconds left in the first quarter, remarkably late in the game to start putting points on the board in a game that finished with 93 total. The scamper broke the school record set by Rod Williams against Southwest Mississippi in 2013. Odum’s 68-yard catch came about two minutes later.

“He’s had a big year so far yardage-wise, and he’s been in the end zone a lot,” Wright said. “He’s a dynamite player.”

After an EMCC touchdown with 3:41 left in the half, Gulf Coast drove back down the field and scored on a 3-yard throw to Cyrus Hartfield (So., Hattiesburg/Hattiesburg). He also had a key 31-yard reception to set up the score with 11 seconds left.

Ramone Bradley (Fr., Fairhope Ala./Fairhope) caught a 13-yard pass from Pat McQuaide (Fr., Solon Ohio/Solon) on the first drive of the second half. Dramarian McNulty had an interception on the next EMCC possession, returning it to the 10-yard line. That set up a 22-yard field goal by Gabe Showalter (Fr., St. Martin/St. Martin) with 7:56 left in the quarter to make it 31-7. McQuaide finished 19-for-34 for 337 yards and four touchdowns. That ties him for the third-most touchdowns in a game in school history.

The Lions scored on their next three possessions to make it 31-26, but Gulf Coast responded with a seven-play, 63-yard drive capped by Evans’ 1-yard plunge to push the lead back to 12 with 9:12 to play. EMCC answered with a long drive, but Odum caught an 80-yard touchdown pass 22 seconds later to make it 45-33. The Lions, however, would score twice in the final four minutes to go ahead with 61 seconds left. Gulf Coast couldn’t not answer that time.

“We had a chance to get some first downs late third quarter, early fourth quarter on offense and really take the pressure off our defense,” Wright said. “We just didn’t do it. We’ll have to go back and look and see where the fail-points were, but it feels like we ran out of gas.”

Gulf Coast outgained East Mississippi 233-52 on the ground and wound up leading the time of possession by 3:39.

“That’s the frustrating thing,” Wright said. “We were able to run the football somewhat. Probably never as good as you want, but they weren’t able to run the ball at all. Typically, in those kinds of games, even though they’re a really good team, that plays into your hands.”

Gulf Coast was flagged for 17 penalties for 137 yards, with East Mississippi hit 12 times for 91 yards.

The Bulldogs remained unbeaten in the South Division, a half-game back of Jones and Hinds. They’ll travel to Pearl River next week to play their archrivals in Poplarville. Kickoff Thursday is set for 7 p.m.

Gulf Coast still controls its own destiny for a playoff berth.

“The message to the team is this is a really good team,” Wright said. “I think anybody who was at the game tonight would admit Gulf Coast is a really good football team. I’m proud of them. We have a lot of talent and lot of guys who fought really hard tonight against. We’re a good team. We just came out on the short end of an unbelievable game.”