OXFORD, Miss. – Fifteen University of Mississippi staff members recently completed their first week of a residency aimed at allowing them to advance creative projects outside their formal positions.

The participants of the Staff Creative Residencies Initiative were selected from a pool of 48 applicants. The Office of the Provost provided pay for each recipient at their normal rate plus a $500 stipend for expenditures.

Edge; Afton Thomas, associate director of the Center for the Study of Southern Culture; and Andrea Jekabsons, the university’s chief human resources officer, reviewed and scored each application on several areas, including growth, effect and how the project reflects the university’s mission.

“Because of the quantity of strong applicants, we expanded the recipients from 10 to 15,” Jekabsons said. 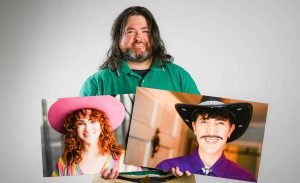 Kevin Cozart, operations coordinator in the Sarah Isom Center for Women and Gender Studies, displays photo portraits of LGBTQ Mississippians that he captured during his staff creative residency. Photo by Bruce Newman Photography

Kevin Cozart, operations coordinator in the Sarah Isom Center for Women and Gender Studies, made photo portraits of LGBTQ Mississippians using natural light in environmental settings. His endeavor is something that he studied nine years ago in a photojournalism class, but hasn’t had the opportunity to attempt again until the residency.

During the week, Cozart took photos across the state in Tupelo, Columbus, Hattiesburg, Gulfport, Jackson, Cleveland and Clarksdale, and out of state in Memphis and New Orleans.

“I think the biggest impact is the freedom to be creative for my own sake and not use my creativity on other people’s projects,” Cozart said. “It’s been a long time since I’ve just taken pictures for myself and not for a project or a gig.”

“This is something I’ve been intrigued with for a long time,” Russell said.

“Bill was very helpful in explaining proper techniques and tools he’s used over the years to produce his stellar sign work. Being able to research and gather the materials has put me in a great place to expand my interest further. I hope to one day create custom signs and wall murals for my community.” 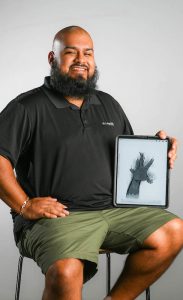 Frank Estrada, visual resources specialist and gallery curator in the Department of Art and Art History, shows a piece he developed during his staff creative residency, in which he worked on his augmented reality and animation skills. Photo by Bruce Newman Photography

Sydney DuPriest, associate director of campus communication and engagement in University Marketing and Communications, advanced her quilting skills and learning by working with Coulter Fussell, of Water Valley.

“Coulter talked me through the different quilting techniques I could use, but also how to think about working with material that originated with someone else, and how to honor that and add value to it,” she said. “Spending this uninterrupted, dedicated time on something so fulfilling helped change the way I think about what’s possible in the pockets of time between work and family and day-to-day responsibilities.

“It reminded me that those free moments are valuable and full of potential.”

Mary Knight, communications specialist in University Development, is writing a book that will be part biography on Water Valley native and Cold War poet Hubert Creekmore; part autobiography, as it will include aspects of her search to find out more about the closeted Mississippi writer; and part pictorial essay on the places of importance to both Creekmore and Knight.

“This book is a continuation of the research I begin in 2019 for my MFA thesis requirements, which resulted in a paper detailing Creekmore’s letters and papers in various archives and a short documentary film, ‘Dear Hubert Creekmore,’” Knight said. “The film was shown at the Oxford Film Festival and the Queerbee Film Festival in London, England.

“I am excited about the opportunity this grant is allowing me to give my research a new way to share my findings on Creekmore with a wider audience.”

Other residency recipients include:

Weeklong residencies took place throughout June and July. Each of the residents will follow up with a self-assessment in August.

A presentation of the results is scheduled for 4 p.m. Sept. 1 at Johnson Commons.