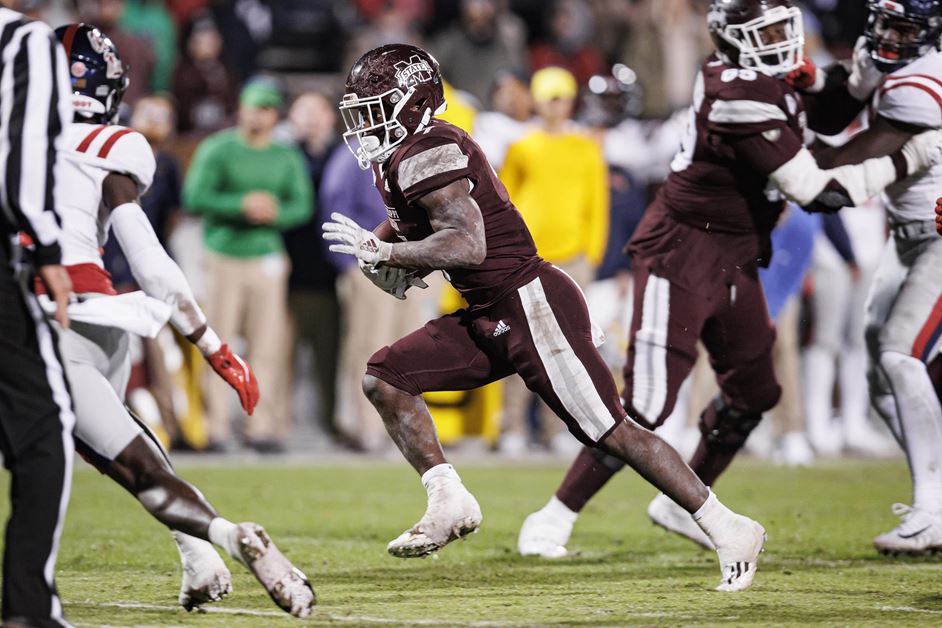 STARKVILLE – Mississippi State junior running back Jo’quavious Marks was named to the preseason watch list for the Paul Hornung Award on Thursday.
The Paul Hornung Award is presented annually to the most versatile player in major college football by the Louisville Sports Commission.
Marks has certainly showcased his versatility during his first two seasons in Mike Leach’s Air Raid offense. He has not only proven he can pick up yardage by carrying the football but can also be an effective option in the passing game as both a blocker and receiver out of the backfield.
The 5-foot-10, 210-pounder from Atlanta, Georgia has rushed 176 times for 728 yards and nine touchdowns in his career while also hauling in 143 passes for 770 yards and three more scores. He has also returned 11 kickoffs for 231 yards.
Marks broke the Bulldogs’ receiving record for both a running back and a freshman in 2020 with his 60-catch season. Last fall, Marks’ 83 catches were the most by a running back in the country and also topped all Southeastern Conference tailbacks with 502 receiving yards.
Marks is one of only four SEC players picked to the Hornung Award preseason watch list. The preseason watch list was compiled by a panel of college football experts based on a combination of statistics, career performance, sports information director recommendations and expectations heading into the 2022 season.
The Hornung Award winner will be honored at an annual dinner in his honor at the Galt House Hotel in downtown Louisville, Kentucky in March 2023.
For more information on the Bulldog football program, visit HailState.com or search for “HailStateFB” on Twitter, Instagram and Facebook.