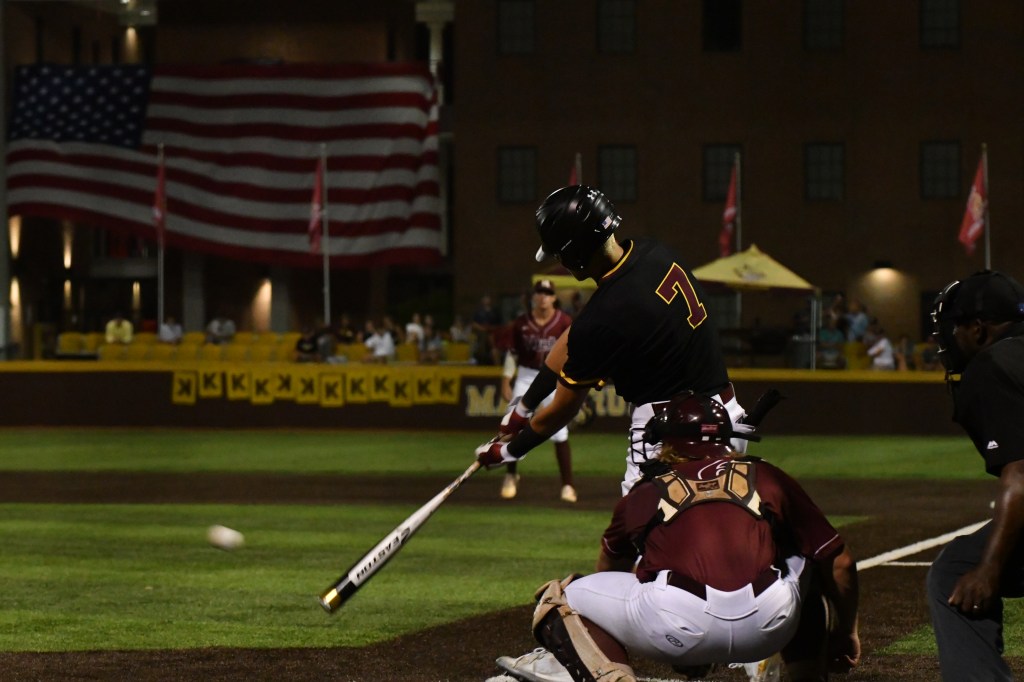 POPLARVILLE, Miss. — After two blowout victories to begin the Region 23 Tournament, the No. 1 Pearl River baseball team had to win in a much different way Wednesday night. Freshman Preston Soper (Madison; Germantown) was the hero, smacking a walk-off single to send the Wildcats to the Region 23 title game with a 6-5, 12-inning victory.

The victory sets up a matchup with LSU Eunice tomorrow at 4 p.m.

“How ’bout them cats,” head coach Michael Avalon said. “I told the guys in the ninth inning that no matter what happened, I was proud of them. That’s a good team. They battled, fought, and scratched. They made us beat them. I am proud of a lot of dudes over here by me. What a special group. I’m very proud of that big win. Now we will try to get some rest and get ready for tomorrow.”

Avalon delivered a message to the Wildcat faithful after the contest.

“If you’re proud of them, be here tomorrow. They need you,” he said. “These dudes are pouring it out. It matters to us, but it also matters to a lot of other people. If it matters to you, show up tomorrow and bring some energy. They’re going to play for those who are out here. This is the best junior college atmosphere in the country. These guys need you.”

Pearl River (39-10 overall) set the tone right from the start. After Leif Moore (Biloxi; St. Martin) pitched an easy top of the first, the Wildcats grabbed momentum in the bottom half of the frame. Gabe Broadus (Wilmer, Ala.; Faith Academy) walked to open the inning and stole a base right after. The left fielder broke for third base a few pitches later. He had the bag stolen with ease, but a wide throw allowed him to score the first run. Alex Perry (McComb; North Pike) then stepped to the plate and blasted the first pitch of his at-bat deep over the center field wall for a solo homer and 2-0 lead.

The Wildcats went ahead 3-0 in the third inning as Perry scored on a wild pitch.

Hinds (30-18) recorded both its first hit and first run on the same swing in the top of the fourth inning, belting a homer to cut the deficit to 3-1.

Moore got the first out of the fifth inning before Ryan Burt (Columbus; New Hope) entered the game and promptly got the next two batters out.

Hinds tied things up in the top of the sixth inning, but the Wildcats grabbed the lead back in the bottom frame. Soper hit an opposite-field double off the left field wall and moved to third base after a sacrifice bunt by Taylor Woodcock (Pass Christian; West Harrison). With the infield drawn in, John Griffin Bell (Mobile, Ala.; Faith Academy) lined a single over the head of the shortstop to drive him in and give PRCC a 4-3 lead.

The Eagles were able to get the tying run into scoring position in the top of the seventh but a big punch out from Cole Tolbert (Laurel; West Jones) put an end to the threat.

Hinds got another runner on base in eighth, but Tolbert was able to get a batter to ground into a double play to end the inning.

The Eagles took a 5-4 in the top of the ninth inning by way of a two-run homer.

Broadus led off the bottom of the ninth with a walk before trading places with Tate Parker (Gulfport; West Harrison) on a fielder’s choice. Perry singled into right field allowing Parker to advance to third. With two outs, D.K. Donaldson (Gulfport; West Harrison) grounded a ball along the first baseline that looked like it was going to roll foul. The ball stayed fair, hit off the first baseman’s glove, gave Donaldson the bag and tied the contest 5-5.

After two walks to begin the 11th, a groundball and a pair of clutch strikeouts from Bobby Magee (Petal) ended the jam.

Pearl River finally put an end to the contest in the bottom of the 12th inning. Matt Mercer (Richton; Petal) nearly ended the game, blasting a double high off the left field wall to get into scoring position. Soper was the hero moments later, smacking the second pitch of his at-bat right back up the middle to drive Mercer home for the 6-5 victory.

After the pandemonium ended, Soper talked about the final blow.

“I just wanted to keep it simple,” he said. “I just swung and that’s what happened. I was nervous going into the at-bat because it was a big situation in the game. I got a good pitch to hit and whatever happened, happened.”

Soper finished the game 2-for-4 with a run and an RBI. Perry also went 2-for-4, tallying two runs, an RBI and a walk. Woodcock also tallied two hits.

Moore pitched 4 1/3 solid innings to start the game, allowing just one run on one hit and three walks. He struck out a pair of batters. Burt tossed 1 1/3 of an inning, giving up three hits and two runs. He struck out one batter. Tolbert pitched 3 2/3 innings, giving up two runs on four hits and two walks while striking out five. Landen Payne (Ocean Springs; St. Martin) got two outs and walked one batter.

Magee pitched his best outing of the season and earned the win. He finished with two innings pitched, one hit, two walks and four strikeouts.

“I just saw it in his eyes when I handed him the baseball,” Avalon said. “He’s a tough, tough, hard-nosed son of a gun. He never wavered there. He made some big pitches, and his stuff was electric.”

Tickets are $12 per day. Kids 10 and under are free. Tickets can be purchased by visiting PRCCAthletics.com/tickets.

Pearl River has re-launched its tournament central page for this season’s Region 23 Tournament. It can be accessed at PRCCAthletics.com/Region23 and will be the home for all tournament information, including livestreams, photos, brackets, directions and more.