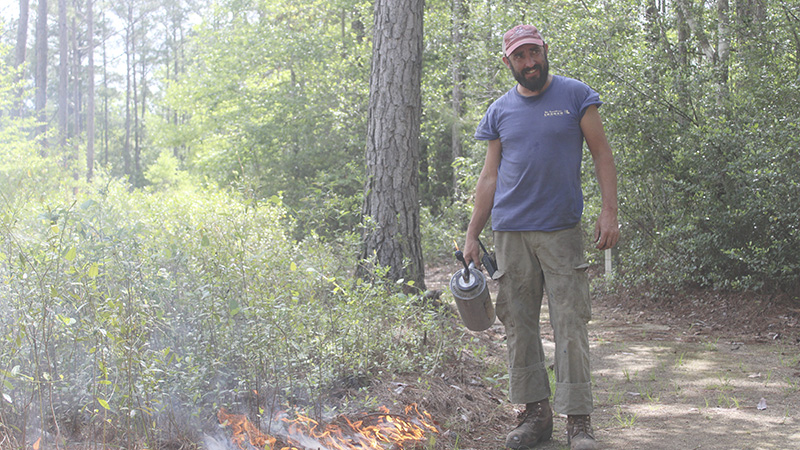 Crosby Arboretum hired Forrest Blass as the facility’s new superintendent and grounds keeper. Blass has been the Arboretum’s grounds keeper for about four months.

He said being a grounds keeper involves skills from almost every previous job he’s had. Blass has been a carpenter, welder, tree climber, and steel worker.

“Still (grounds keeping) uses all of that in a much better setting. More relaxed, and in nature,” said Blass.

This past weekend he got a lesson from former grounds keeper Terry Johnson about how to conduct a controlled burn, which is the slow controlled burning of dead leaves, pine straw and some shrubs to maintain the Arboretum’s savanna exhibit. The purpose is to clear the way for the seeds down in the soil. Those seeds are from fire dependent plants like the pitcher plant, orchids and sunflowers. Performing a controlled burn ensures the seeds get the sunlight and nutrients needed to thrive.

In just a few hours wild plants and grass up to 4-5 feet were turned to ash. And the seeds that were under it all will flourish in just a couple months.

Blass is continuing his training and still learning about the Arboretum. He’s confident with the hands on work of being a grounds keeper; he’s still building a foundation regarding the paperwork that goes with job.

When it comes to being a groundskeeper at the Crosby Arboretum, Blass says he enjoys the variety. He said a lot of creativity and adaptability goes into the job.

Just this past week Blass said he put an enormous sunshade on the greenhouse,

“By myself, which took some thinking,” he said.

He also put a new carburetor in the controlled burn truck and made a new fuel tank out of an old air compressor for the truck. Other duties include small things like clearing the walking trails, changing light bulbs and cleaning the restrooms. After the recent training, he will also soon be in control of conducting controlled burns in sections of the Crosby Arboretum.